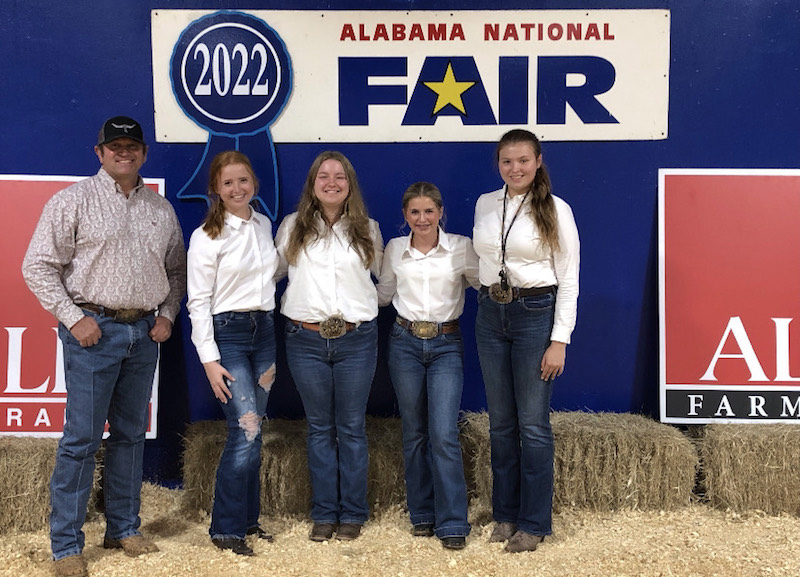 The Thorsby High School FFA dairy evaluation team captured the state title at the Alabama state competition on Oct. 13 in Montgomery. Team members Haley Maddox, Mesha Mims, Tori Mims and Lily Smith worked through six placing classes, two reasons classes and one questions class to compile a high-score of 1,045 points, edging Priceville High School by three points. Thorsby was the lead school out of 17 competing for the state championship, and punched their ticket to the national competition in Indianapolis, Indiana in October 2023.

The dairy evaluation competition features multiple classes that incorporate different skills. First, the competitors placed six classes of animals that had four animals in each class — Spring Commercial Calves, Brown Swiss Heifers, Holstein Heifers, Jersey Calves, Guernsey Heifers and Two-year old Holsteins. The teams place the animals in order after an evaluation and write down their reasons from the placement.

After that, the competitors go in front of the judges individually who have already evaluated the animals and have their own reasons. The team’s individuals answer questions from the judges on why chose the order they did, but only one of the six classes that were placed are featured in the questions section.

The final part of the competition is two reason classes that take two of the six placing classes, and team individuals must defend why they placed the animals in the order they did. Individuals earn points for correct answers, good points made that the judges found too and the correct placing order. The individual team member’s scores are then added up to compile the team scores, and crown a champion.

“It teaches them communication skills, and it is tough for a teenage kid to stand before an adult who is a professional in that field and justify why they did what they did,” Brian Lucas, Thorsby High School FFA advisor, said. “That is probably one of the most beneficial parts of this contest is speaking, the second thing is decision making and standing by your decision with confidence.”

Mesha Mims said the most challenging part for her was the questions portion because the judges asked tough questions, and the questions were from one of the first classes of animals she placed. Mesha Mims said it was difficult to narrow your thinking down from six classes to one class, and she was taken back with how big the competiton was.

“There was a lot more people this year at dairy,” Mesha Mims said. “There were the most people I have ever seen there.”

Smith said the reasons part was challenging due to having to defend her reasons one-on-one with the judges, and standing in front of them and talking.

Tori Mims said placing the classes of animals was a lot more difficult this year than in past years.

“The placings are normally a lot easier, and they are not as close, but this competition they were,” Tori Mims said. “This heifer and this heifer look almost identical, but there is one little thing that is different that place one over the other. If you miss it, you are wondering how am I supposed to place these, and it was really hard this time.”

However, Tori Mims said having Smith on the team was a huge asset because of her background in evaluating livestock, including heifers. Heifers are categorized as females who have not had a calf, and their utters are not developed, so the competitors evaluate their frame. Cows are females who have had a calf, and their utters are fully developed, and the competitors evaluate both the frame and the utter.

“It made it a whole lot harder, and it makes the placings so much closer,” Smith said.

Mesha Mims and Smith registered 250- and 245-point scores, respectively, in the placing portion to lead Thorsby. In the question portion, Tori Mims and Haley Maddox scored the highest scores from the Rebels teams.

Lucas said he was happy with how each team member was able to be strong in certain areas, and help pick up the slack.

“They won as a team … where one was weak, another was strong and vice versa,” Lucas said. “Everyone contributed to that victory, and it was definitely a team win. In what we do, you will not make it to nationals based on one individual. That was what I was most impressed and proud of them for.”

The dairy evaluation team members participate on other Thorsby FFA teams, and some of those competitions are in the spring of 2023. If they advance to the national competition in those contests, the team will have to choose which competition they will do at the national convention in Indianapolis. Competitors are allowed to compete on one team per convention.

Tori Mims said if the team chooses to do dairy evaluation at the national competition, their preparation will begin around March of 2023.