A mural worth a few hundred years 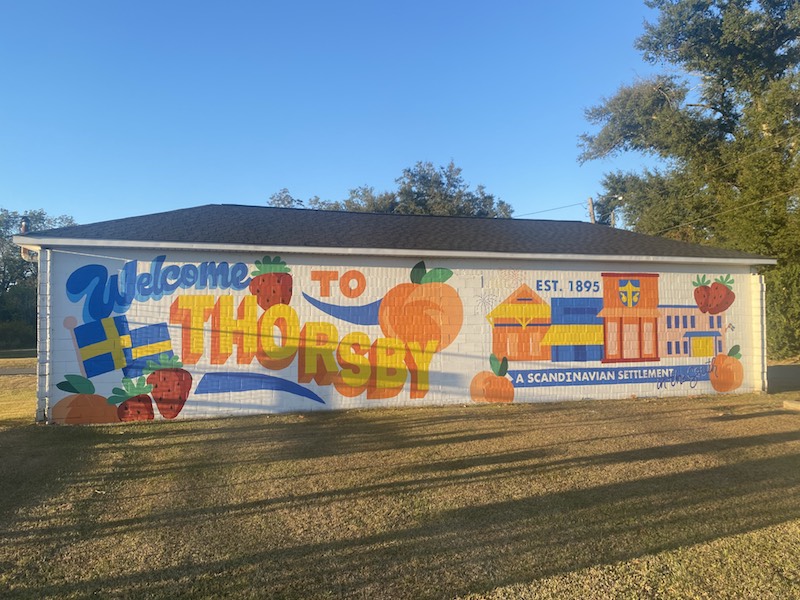 The long-awaited mural in Thorsby is complete, and the residents of the Scandinavian settlement of the south are enjoying the vibrant and heritage-rich design. Presley Langley, owner of the Yellow Room Design Co. in Prattville, worked closely with Whitney Barlow and the City Council of Thorsby to formulate a plan for the mural on the side of the building at the corner of Rebel Street and Minnesota Avenue. The planning began in April, and five months later the plans became a reality.

“They gave me a few ideas in the beginning, and they wanted something that said ‘Welcome to Thorsby’ or a Swedish nod in there,” Langley said. “They liked the old postcard style … We probably went through six to eight designs all together.”

Langley said she wanted to make sure the city council and Mayor Robert Hight were happy with the design before putting paint to canvas. The designs began with more of a fruit theme to highlight Thorsby’s deep agriculture tradition, and changed to more of a municipality theme incorporating buildings from around the city.

Langley was given a book that highlighted the history of Thorsby, and the buildings on the right side of the mural were painted by inspirations from the buildings found in the book. A general store and train depot are depicted on the mural.

“A lot of times the client has an idea of what they want, but do not know how they want it executed,” Langley said. “That is the job of the designer is to take their ideas and their inspiration, and create something that everyone is happy with.”

Yellow Room Design Co. is made up of Langley and her younger sister, Ryder. Presley designs the mural, and the two sisters paint the mural together. The first day Langley assessed the wall and made sure her crew had the correct materials. The city of Thorsby had the wall pressure washed to make sure the wall was clean and ready for paint.

From there, Langley put a primer on the wall first with a paint sprayer that the company purchased for the Thorsby project. Grass connects to the bottom of the wall, and paint brushes would dirty the bottom of the mural, so a sprayer worked best.

Langley then used a projector to project the design onto the wall so the details were perfect, and the design matched up well with the wall. After the outlines, the sisters worked on painting the mural for six straight days working four to five hours each day. The Thorsby building was the largest canvas Yellow Room Design Co. has painted sitting at just over 50 feet long.

“It is always intimidating because you know every letter and every fruit has to line up,” Langley said. “When you step back and see that it all works out you are so excited, and we were extremely happy with how it turned out.”

Langley said others have told her that the Thorsby mural is the best one yet her and Yellow Room Design Co. have created. Hundreds of people made their way across the road from Richard Wood Park on Oct. 8 at the 2022 Swedish Fest to observe and take photos in front of the mural.

“I think I am so close to the work I do not see the progression, but I think over the years our designs have gotten more detailed, intense and professional looking,” Langley said.

The Thorsby mural is located behind the historical marker and Scandinavian flag court across from the Thorsby Fire Department.