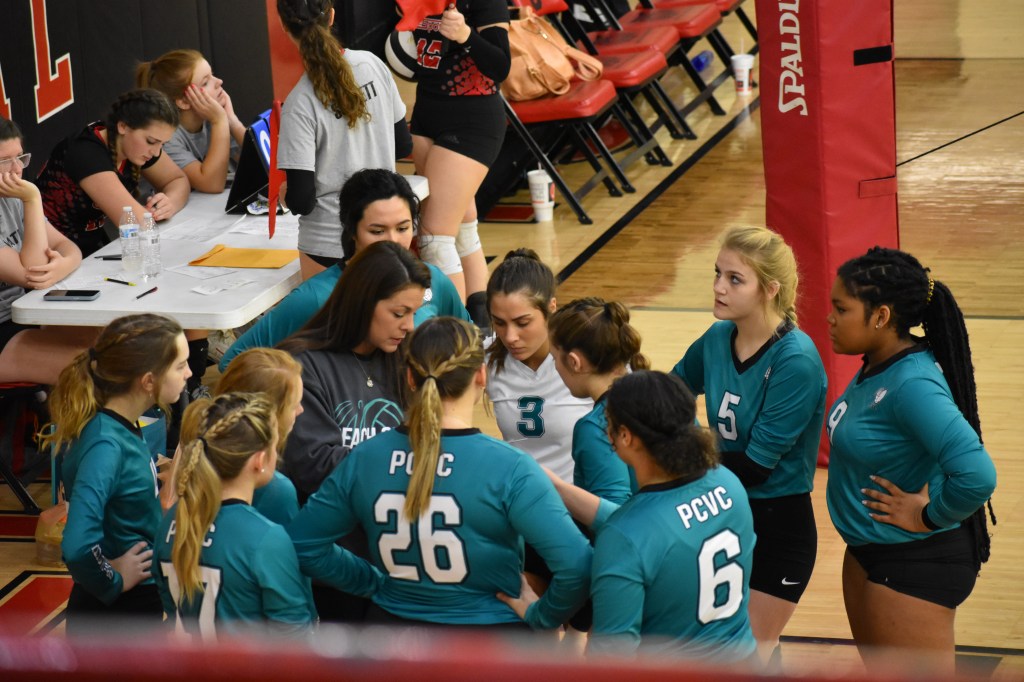 Paige Hinton with the 17U Peach City Volleyball Club team during a timeout.

When sisters Kacy Payton and Paige Hinton founded Peach City Volleyball Club, they had one goal in mind — to create more opportunities for area volleyball hopefuls.

Payton and Hinton are accomplishing this goal by providing a central location for training, and by reducing expenses for athletes who otherwise would have to travel outside Chilton County to find a club volleyball team.

“It’s essentially the equivalent of travel softball,” Payton said. “It’s bringing together girls that don’t go to the same school to have a next-level experience of the sport.”

For the uninitiated, club volleyball is for ages 10-18 and is not affiliated with school volleyball team. In fact, only three girls from the same school can play on the same team. PCVC is registered under the Southern Regional Volleyball Association (SRVA), which allows both boys and girls teams, but PCVC is currently only girls.

Both Payton and Hinton are well aware of the expenses associated with playing a sport like club volleyball. These expenses are exacerbated by the fact that most of the games require travel. Add onto that the expenses of traveling outside the county to play on a team, and the impact on one’s budget can become significant.

When Payton played, she had to travel because there was no local club volleyball team for her to join. In addition, her niece had to join a Marbury-based team to play club volleyball. Through PCVC, the sisters hope to bridge this gap for upcoming generations of athletes.

Payton said the next-level training afforded by clubs like PCVC could potentially lead to an opportunity to play college volleyball.

“We try to make it as affordable as possible so that girls are able to play,” she said, noting that PCVC awarded four scholarships in

2021 that allowed four girls to be able to play.

While the SRVA allows ages 10-18 to compete, Peach City Volleyball Club is still in the process of filling out those age brackets.

Tournaments occur over one or two days, and PCVC has competed in tournaments in Pelham, Muscle Shoals, Hoover, Atlanta and Murfreesboro, Tennessee. Hinton has also conducted clinics at Verbena High School, Chilton Christian Academy and the YMCA of Chilton County, in addition to teaching private lessons. Friendship Baptist Church has also allowed the club access to their gymnasium.

“The YMCA is wonderful letting us use theirs, but they only have one volleyball net set up. We have to use different locations,” Payton said. “This allows us to have a more consistent practice schedule.”