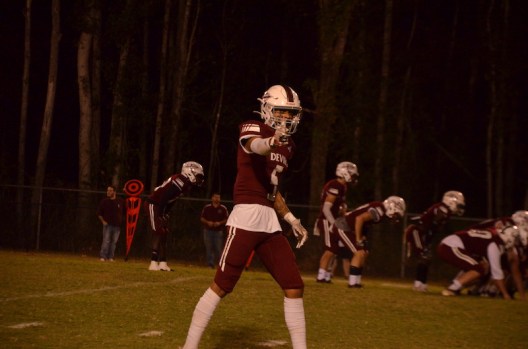 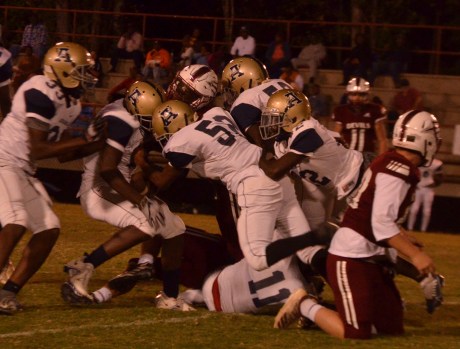 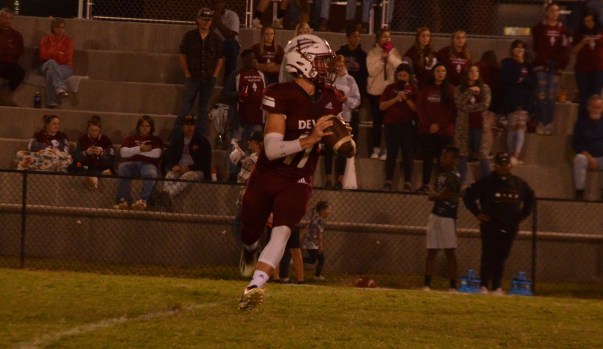 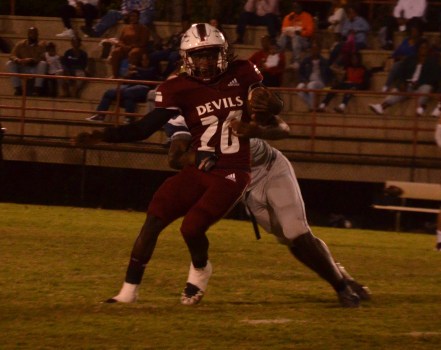 Coming into the Sept. 30 matchup, Maplesville had given up just 14 points through three region games this season, and that total remained the same after 48 minutes. Maplesville held Autaugaville to 94 yards of total offense and forced four Eagles turnovers in the game. The Red Devils defense allowed just five first downs in the contest.

“The coaches have done a great job since those first two games of changing up some personnel and changing up some of the stuff we do and simplifying things,” Maplesville coach Brad Abbott said. “They are playing together on defense, and having fun, and they are getting that confidence that they think people cannot move the ball on them.”

Cade Smith led the Maplesville defense with four and a half tackles. Abbott said the team practiced more physical than most weeks in preparation for Autaugaville, and had to have freshman step up into key positions on the field. Abbott said both Coleman Gill and Bryson Pickle were impressive stepping in on short notice and making a difference in the game.

Evan Harrison doubled the Maplesville advantage in the second quarter on a three-yard touchdown run on a reverse to the right side. Quarterback Troy McMillan found Pickle for the two-point conversion pass to make it 16-0.

“It was a physical ball game, and Autaugaville plays a physical style of football, so you expect those things and that is why we practiced so physical these last few weeks to get ours guys in that mentality,” Abbott said. “Overall, I thought both sides of the ball played really well … There was not much to complain about.”

Autaugaville put together a drive that found themselves inside the Maplesville 30-yard line. On a pass to the end zone, Payton Cook made the read in the defensive backfield and pulled down his first interception of the first half. On the next Autaugaville possession just before halftime, Cook picked off his second pass to end the Eagles threat and send the Red Devils to halftime up 16-0. Cook added three catches for 64 yards to his totals.

Gill got into the end zone on the first Maplesville possession of the second half on a seven-yard run to extend the lead to 22-0. Gill had 36 rushing yards on 10 carries.

The best chance for Autaugaville to put points on the board came at the midway point of the third quarter when the Eagles were faced with a fourth down and one at midfield. Maplesville’s Wilson slashed into the backfield and stopped the fourth down try and got the ball back for the Red Devils.

Wilson added to his impressive night with a 33-yard punt return later in the third quarter that pushed the Maplesville lead to 30-0 after three quarters. Wilson ran for 20 yards on three carries. Pickle put a 21-yard touchdown run on the board in the fourth quarter to post the final tally of 36-0.

“We have a lot of good teams left in region play … We just have to keep working and cleaning up things,” Abbott said. “The guys want to get better, and that is a good thing. Overall, we just need to keep doing the things we are doing and trying to get a little better each day.”

Maplesville (4-2) travels to Billingsley High School on Oct. 7 at 7 p.m. for their next matchup. Autaugaville (4-2) host Loachapoka High School on the same day and time. Both games are Class 1A Region 4 clashes.