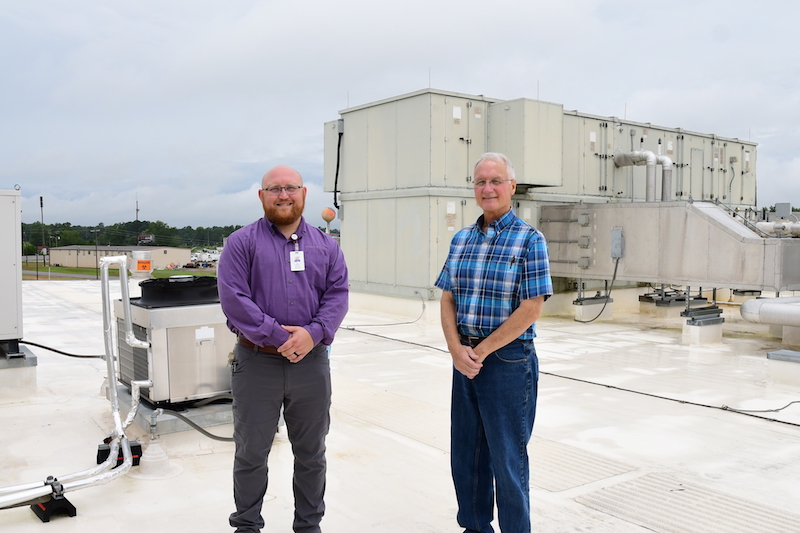 STORY AND PHOTOS BY JOYANNA LOVE

When residents come to Ascension St. Vincent’s Chilton for an appointment or because of an emergency health situation, they see the staff and medical equipment that makes care available.

What they cannot see is all of the technology and energy efficient measures put in place to ensure the building is heated and cooled in a cost-effective manner and that air in the patient rooms never becomes stale.

Planning for the best possible efficiency and air quality began with construction choices.

These efforts decreased the energy cost to run the building, while contributing to the sustainability and longevity of the hospital.

Two microturbines, which run on natural gas, were incorporated as a component. Threlkeld said they are basically small jet engines. Roberson said using microturbines is new in Alabama, and “goes a long way to the hospital’s overall resiliency and efficiency.”

It reduces the dependency on traditional electrical power for the hospital, since each of the

microturbines has a generator creating up to 65 KW of power each “which is fed back into the electrical system for the hospital.”

“Traditionally, in most hospitals, it’s the health and safety code, you have to be able to maintain certain things for your spaces of occupancy and natural gas has a great record of being very, very dependable,” Roberson said.

He said natural gas readily meets large demands for water heating, cooking and heating, such as those at Ascension St. Vincent’s Chilton.

In addition to the microturbines, the boilers, one of the chillers, humidifiers, the kitchen equipment and a steam generator used for sterilization all run on natural gas.

To protect against power failure, the hospital has a backup powerline to the building and an emergency diesel generator.

If the electricity goes off, the microturbines are used to run things that may not be essential to maintaining patient care but are still important to have on. A diesel generator would be used to power the essential equipment.

“By doing all of this energy efficiency, we cut the requirement for a diesel generator (compared to a similar sized hospital),” Threkeld said.

The heat produced from the microturbines while it is generating power is channeled into a vacuum where it is chilled to cool down water to be used for the chilled beams that cool each of the rooms, facility manager Jeff Roberts said. 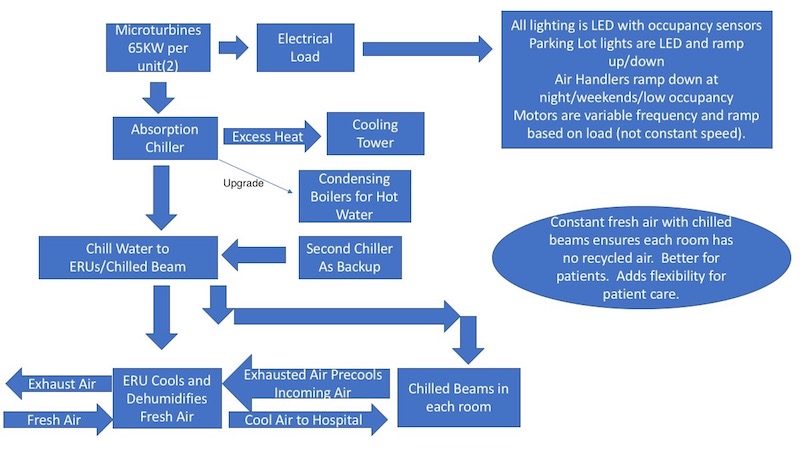 The air system used for the hospital draws all of its air from outside, ensuring fresh air is always circulating through the rooms.

Roberson said using the outside air “brings in oxygen … it displaces any kind of any harmful bacteria, viruses, so on and so forth to the outside.”

Realmuto said “this hospital was set up far better than most for the pandemic,” because the air system being used made creating isolation rooms easier.

Roberts said the rate at which the air flows is equivalent to a room of totally new air every 15 minutes.

As outside air is drawn into the system, it is filtered and run under a plate that has been cooled by the exhaust air flowing above it and out of the system. As the incoming air runs under the cooled plate, it becomes cooler by as much as 10 degrees, Roberts said.

The air conditioning system uses specialized radiators, called chilled beams, that use chilled water to create the cold air. Instead of blowing cool air through a large duct, a six-inch duct is used for air to be pushed into the chilled beam, Threlkeld said.

The system has only one exhaust.

Using this system allowed the infrastructure to take up less space in between floors, thus reducing construction costs as well as the height of the building.

“We’ve paid for the (chilled beam) system by reducing the amount of distance between the floors in concrete and steel,” Threlkeld said.

Thermostats in each room are programmable and have sensors to keep the temperature in the room comfortable at all times.

“It does it as a natural process, where in your house you will feel air moving, you won’t feel it on those,” Roberts said. “It allows it (air) … to cascade down at a slower rate, so you don’t get that chill from air blowing across you and stuff like that.”

Condensation created within the system is captured and used in the system’s cooling tower “to rid the absorption chiller of heat,” Roberts said.

This eliminates the need to pay for water for the cooling tower.

Realmuto said a cooling tower “is the absolute most efficient” way to lower the temperature. 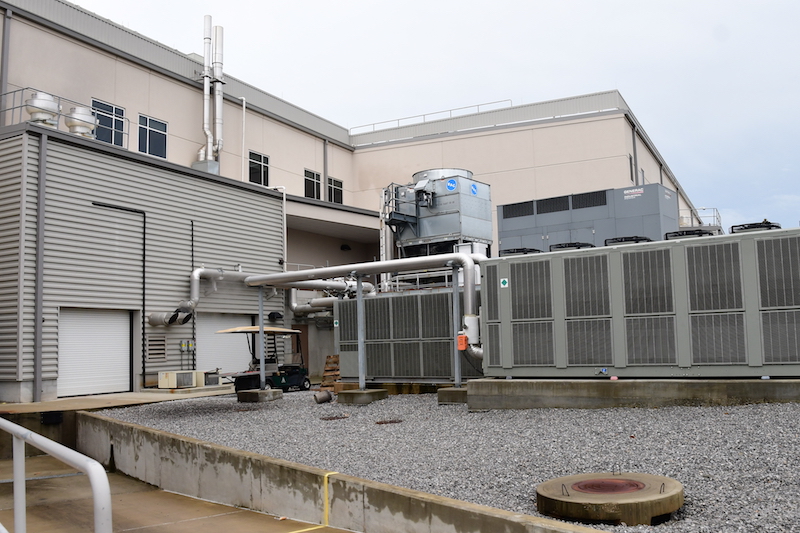 An extra chiller is seen with the cooling tower in the background.

Maintaining energy efficiency has continued to be a focus in the hospital’s nearly six years of operation.

“We are looking for opportunities to make sure we maximize savings in every aspect of the ministry, and energy savings is certainly one of them,” hospital administrator Shanon Hamilton said.

This also includes continuous insulation, LED lighting throughout the facility with occupancy sensors to turn the lights off and timers to dim lights in the parking lots and front lobby areas.

“LED lights use one-third the power of a fluorescent light,” Threkeld said. “So it is not just less energy, it is less radiated heat, less maintenance.”

Variable frequency drives allow motors in pumps and air handlers to be adjusted to run at lower than 100 % capacity depending on demand, Threkeld said.

While operating the sophisticated energy system at the hospital, the team has discovered yet another way to maximize efficiency.

in a vacuum, but to also produce hot water.

This hot water can be used to heat the building and replace some of the other functions currently handled by the hospital’s boilers, said Roberts.

“During the summer, I doubt we will even use the boiler, once you get this upgrade in,” Roberts said. “… Then in the winter months, I guess we will reduce our load by 40%”

Threlkeld said the project will pay for itself in the cost savings on natural gas.

Maintaining a focus on good stewardship of energy resources has continued in the hospital’s day to day operations, such as collecting used cooking oil from the kitchen to be sent to a facility that uses it for fuel.

“We’ll always continue to evaluate opportunities that we can incorporate into our operations to help us become more efficient, so that we can reduce the overhead of operating the hospital, but also to provide resources for our community,” Hamilton said.

In the future, this could include researching the possibility of having a recharging station for electric vehicles.

Ascension St. Vincent’s Chilton is researching recognition by the Department of Energy through its Technical Assistance Partnership.

Roberson said the partnership is with universities throughout the country focused on energy efficiency.

Ascension St. Vincent’s Chilton wants to be a model for what can be accomplished in the southeast.