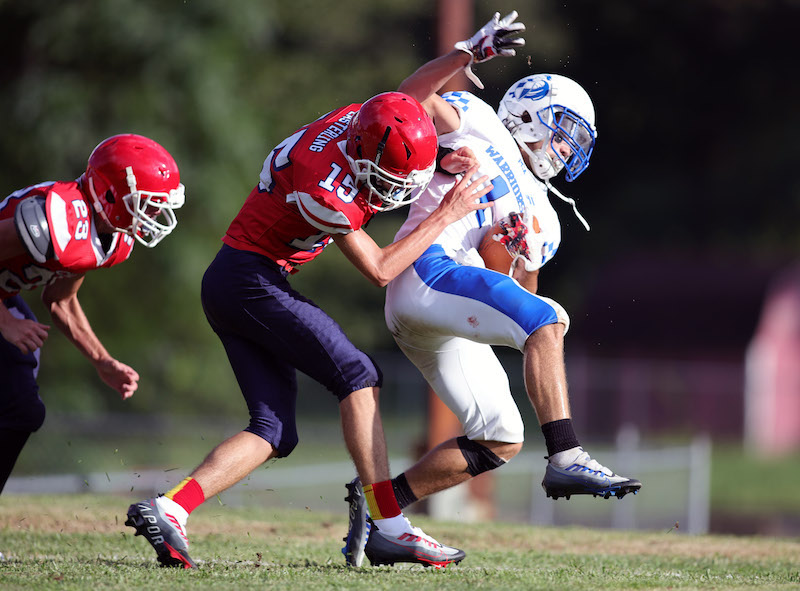 The Patriots, who are usually a run-heavy offense, put a wrinkle into their scheme and let quarterback Tucker Easterling air it out. Easterling responded going 8-for-10 for 286 yards, five touchdowns and one interception.

“Everyone knows us as a running team, so we thought we would open it up through the air because we had to work on it, and they did their job,” CCA head coach Jay Norcross said.

Easterling’s favorite target was Mason McCary who hauled in seven catches for 263 yards and five touchdowns, and added a rushing touchdown.

“We have been trying to work on that so we are not relying on just a straight running offense,” CCA assistant coach Mark McCary said.

CCA and Trinity battled throughout the first half with the Patriots holding a 28-14 lead at halftime. Trinity scored on their opening drive of the second half to cut the lead down to 28-20.

Then, it was all Patriots. CCA rattled off 32 unanswered points to end the game and power to the 60-20 win. The CCA defense was led by Mason McCary with 11 tackles, and the senior added a sack and a fumble recovery. Joshua Langston had nine tackles, and David Villegas and Easterling each pulled down interceptions. Villegas converted six of eight extra-point kicks against Trinity.

“After halftime, the guys really got it together, and they pulled it out at the end,” Mark McCary said. “After (Trinity) scored after halftime, that is when they really came to life.”

Chilton Christian (4-1) will have two consecutive weeks off, a benefit for the Patriots to heal up according to Norcross. CCA will travel to Trinity Christian in Oxford on Oct. 14 for their next matchup.