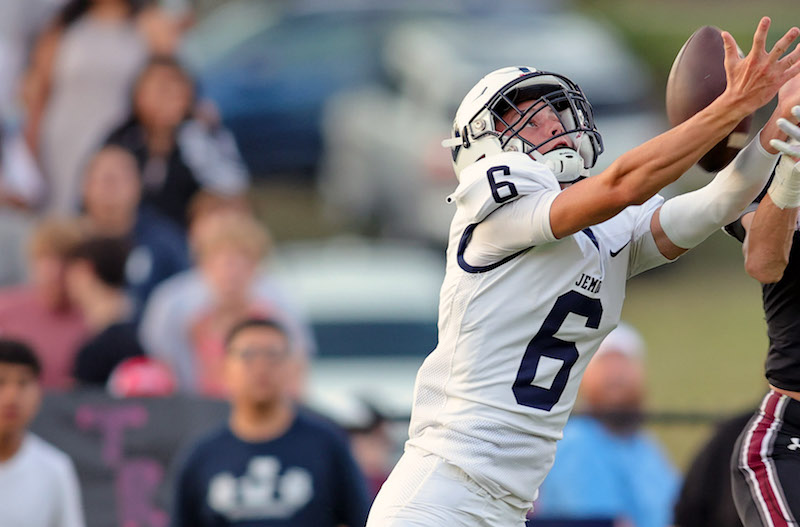 Jemison High School got its second win of the 2022 season on Sept. 23 beating Montevallo High School 20-12 at Panther Stadium. The Panthers used a trio of rushing touchdowns and a solid defensive performance to win their second game out of their last three.

Leading 14-12 going into the fourth quarter, Jemison quarterback Jaxon Padlo found Coden Cummings on a long pass that setup the Panthers inside the Montevallo red zone. On third down, senior running back Efrain Villeda rallied for a 15-yard touchdown run to push the Jemison advantage to 20-12, and the eventual win.

“We found some ways to get the ball out on the perimeter,” Jemison coach John Therrell said. “We were more difficult to deal with from a defensive standpoint than just your vanilla lineup we had been doing the last few weeks.”

The Panthers broke open the scoring late in the first quarter when Cummings ran for a 26-yard touchdown. Cummings added the extra point to make it 7-0 Jemison after the opening quarter.

Tucker Bradford intercepted a pass early in the second quarter, and he converted that into a touchdown with a 53-yard run a minute later. Juan Carlos Sanchez converted the extra point to double the Jemison lead.

Jemison punted to Montevallo with two minutes left in the first half, and the Bulldogs moved down the field quickly. Montevallo got on the board with a few seconds left with a touchdown pass from Braxton King to Javon Rogers. The extra point was missed, and Jemison held a 14-6 lead at halftime.

“Our guys knew that if they went out and executed their job, they would be successful in the game. They saw that over the course of the first half,” Therrell said. “They did not have to do anything spectacular, they just did their job and it paid off.”

Jemison’s first possession of the second half was derailed by an interception, but Orlando Mora got a sack and forced the Montevallo punt. Later in the third quarter, Montevallo’s King and Rogers connected on another touchdown pass, a 50-yard strike. The two-point try was missed, and Jemison held the 14-12 lead after three quarters.

“We made plays in this game that in some of the games earlier this season we did not make,” Therrell said. “They are getting a little more swagger and confidence about them … and that helps build them.”

Jemison will get back to AHSAA Class 5A Region 3 play on Sept. 30 against Holtville High School in their next game. Kickoff is scheduled for 7 p.m.