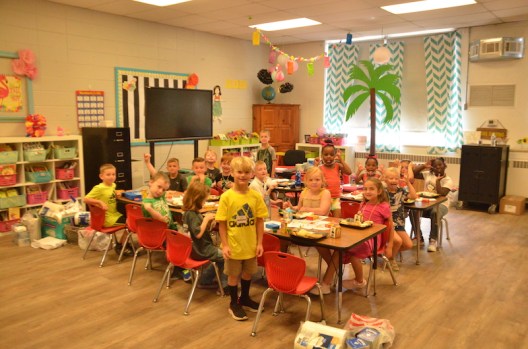 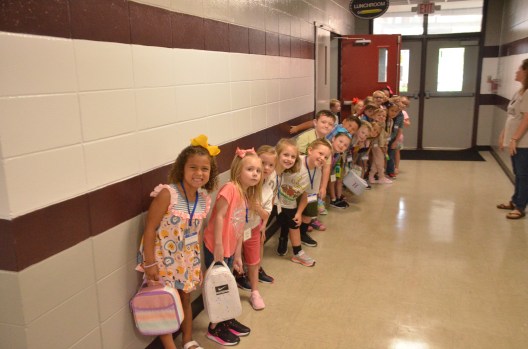 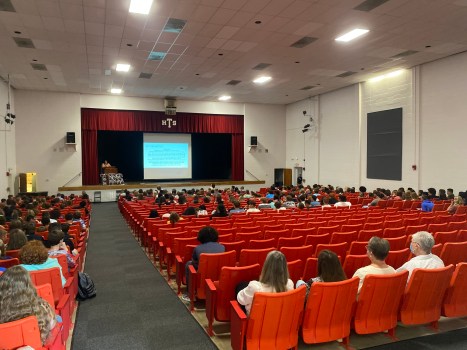 The 2022 senior class at Thorsby had a presentation of the upcoming school year on the first day. (CAREY REEDER | ADVERTISER) 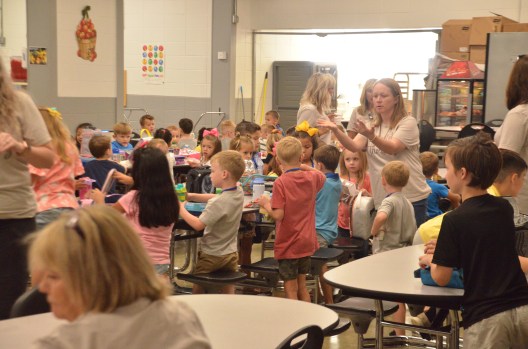 Energy and enthusiasm filled the halls of Thorsby School again on Aug. 10 to welcome Rebel students back for the 2022-2023 school year. Kindergarten to 12th grade walked through the doors to begin their new adventure.

Principal Corey Clements said this year is the fifth consecutive school year Thorsby has seen an increase in student population. It was a steady 10-15 student increase each year, but this year, Thorsby has about 60 additional students.

Having bigger cities to each side of Thorsby on U.S. Highway 31 is part of the increase, Clements said. Also, he said it has to do with the caliber of school Thorsby has become.

“Academically our school report card has gone up each of the past five years, athletically everything is going in a positive direction,” Clements said. “Our elementary school test scores are good, and our churches are very active and everything works together … A lot of positive things to draw people here.”

Thorsby is unique being a K-12 school, and that can present challenges for staff members that other separate middle and high schools may not have. For Clements in his 25th year as a staff member at Thorsby, he has been able to see children come into the school as young kids and grow into high school graduates.

“It is hard to manage the personnel, the part everyone else does not see, but I love the fact that I have had two whole groups of kids that I saw them come in as kindergarteners go all the way through until the time they graduated … I love that,” Clements said. “Being a parent with a fifth grader and 11th grader here, there is way more positives (in having a K-12 school), and it is worth the tradeoff seeing that. I think any of the other K-12 principals would tell you the same thing.”

For returning students, 2022 is a new opportunity to learn new things and meet new people. Weston Ellison, a fourth grader at Thorsby, said he is looking forward to this school year and the new faces around the school.

“I want to meet all the new students, and getting to meet the new teacher,” Ellison said. “I have been wanting to see my friends for a long time.”

Ellison will have two teachers this year, and he said he is excited to meet both of them. His first morning of the 2022, Ellison set up his binder for the year. He also completed an activity to help the new classmates get to know each other better.

Ellison plays football for Thorsby and plays quarterback and running back for the elementary school team. He said his biggest goal this school year is to get good grades.

“I need to work hard and be respectful to the new teachers,” Ellison said. “If I see someone who may be struggling on something, I may be able to help them.”

Excitement to meet new classmates and teachers stretched from the elementary hallways to the high school hallways and 10th grader Sarah Hadder shared similar sentiments that Ellison did starting school.

“I have always liked coming to this school with all my classmates,” Hadder said. “I’m excited to see where the new classes will go and the new electives will be fun.”

Hadder is taking a forensics class this school year, and the class will visit local forensics professionals and do mock crime scenes as part of the curriculum. While Hadder wants to be a dermatologist or nurse when she is older, forensics and crime is something she said she thought would be a fun to learn more about.

Hadder cheers for Thorsby and is a member of the varsity cheer team this season. She is also a member of the marching band and plays the xylophone for them. Hadder said you will not miss her during the halftime performances at home football games, performing in her cheerleading uniform. Hadder also plays the piano.

Organization, like Ellison, is key for a successful year for Hadder. With multiple teachers and classes, she has taken the binder Ellison had to the next level by getting one for each class.

“I have one binder for each class, and I keep them perfectly lined up in my locker,” Hadder said. “It is better organized on my end that way if it is all in separate binders.”

“When your city has a population over just over 2,000 and, when you count the staff, there is 820 people here on a school day, the town is the school,” Clements said.

Among those upcoming events, Thorsby and Jemison are having a united pep rally on Aug. 17 to celebrate the start of football season and then the two schools will face the following night. Clements said he is excited about the upcoming season and how important it is to Thorsby to host a Class 5A school like Jemison on Aug. 18.

New therapy dog Koda had his first day of school as well getting to know the students around Thorsby with handler and school resource officer Josh Hubbard.