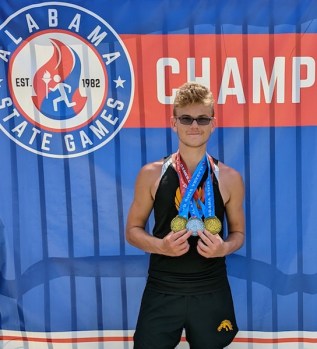 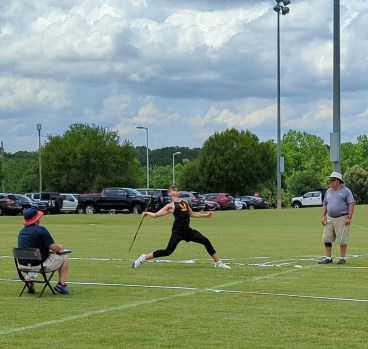 Jimmie Sosa collected some serious hardware at the 2022 Alabama State Games track meet on June 11 capturing two gold medals and one silver medal. Sosa struck gold in the javelin and discus events. He placed second in the long jump.

“It was fine, the only downside to it was waiting because my events were later in the day,” Sosa said. “It went pretty good.”

Sosa is a staple on the Isabella High School track team and does all three of the same events for the Mustangs in the spring. The state meet was Sosa’s first time competing against athletes his age only in the men’s 13-14 age group. At Isabella, Sosa normally competes against older throwers and jumpers as he is only a rising freshman.

“It definitely was not as nerve racking as the normal meets,” Sosa said.

Sosa said his cousin threw the javelin in college and taught him about it as he grew up.

Now, Sosa is a state champion of a sport that is unique to see in high school track.

“That is one thing I like about it, not many people do it,” Sosa said. “It is just a special sport, and I really like it.”

Sosa followed that up with a gold-winning performance in the discus with a throw of 30.14 meters. That throw was over two meters further than second place (27.73 meters). Sosa had only a handful of events before the state meet where he threw the discus, and he said he may have had a bit of good fortune on his throw. He plans to take both those throwing events into his high school track season.

“I may have just gotten lucky on the discus throw,” Sosa said. “Javelin is my main event.”

Sosa finished his day on the long jump where he finished in second place with a 4.95-meter leap. He was just 0.19 meters off of the first-place jump.

Sosa said the thought to compete in the long jump came naturally due to his javelin training. He said the long jump and javelin runup styles are very similar, so it was easier for him to excel in both.

“They translate well into each other,” Sosa said.

Sosa practices every other day and does sport-specific workouts to help with each event. He uses a Javee resistance band with a javelin attached to it to help practice his throws and build up strength in his throwing arm.

Sosa was the youngest javelin thrower at the 2022 AHSAA Class 2A Outdoor Track & Field State Championships on May 6-7 representing Isabella. He finished 10th but said the camaraderie that the Mustangs track team has developed has helped him in his individual meets.

“It is really nice. I have become good friends with a lot of people on the track team,” Sosa said. “Walking down the hallway I can always give someone a high five or say hello.”

Jimmie’s younger brother Jake won the gold medal in the javelin for the 11-12 age group at the state meet as well.