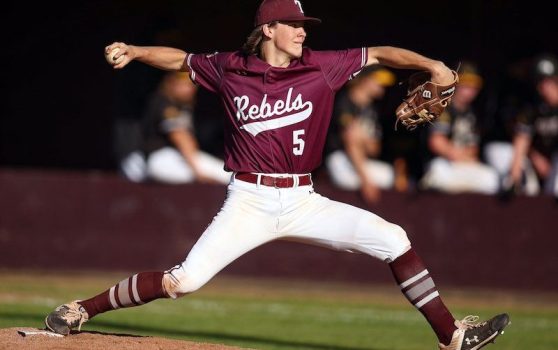 Thorsby High School’s Luke Davis was on the mound for the Rebels in game one. (BRANDON SUMRALL | SPECIAL) 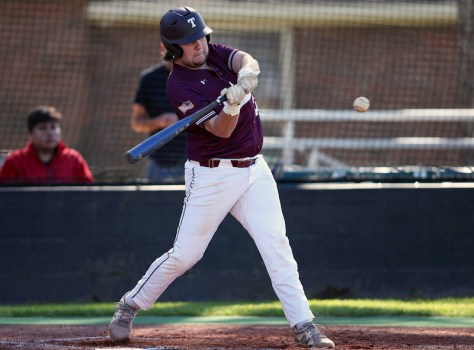 A big Monday afternoon area matchup between Isabella High School and Thorsby High School saw the home-standing Rebels make short work of the Mustangs in game one of a double header as the home team cruised to a 16-0 victory in just 5 innings of work.

Two strikeouts by Thorsby pitcher Luke Davis, along with a two out walk by Tyler Mims brought the top of the first inning to a close with zeros on the scoreboard. The home half of the inning however saw the Rebels post four runs thanks in no small part to three Mustang errors. Chandler Stephens got the inning rolling with a lead-off single on an Isabella error with Peyton Cole and Remington Taylor also reaching on Isabella errors. A two RBI double by Luke Davis scored two Rebel base runners while two more runs crossed for Thorsby in the inning put the home team up on top 4-0.

The second inning would come and go with no change in the score while a three up and three down inning for Isabella in the top of the third gave way to the home half of the inning with Thorsby still up 4-0.

With Isabella choosing to make a change on the mound to start the bottom of the third inning, the Rebels would in turn choose to tee off on the new Isabella pitcher by posting a seven-run inning. Davis and Noah Littlejohn added a pair of doubles to start the inning while a single by Andrew Edwards aided in the Rebels taking a commanding 11-0 lead after three innings of play.

A solo single by Dawson Edwards in the top of the fourth would represent the only Isabella hit of the evening and would do little to help the Mustang cause. Meanwhile the Rebels would use the home half of the inning to post four more runs thanks in no small part to a pair of two RBI doubles by Taylor and Davis.

With the game moving to the top of the fifth inning, the Rebels held a 16-0 lead. Down to their final three outs against a 15-run mercy rule, Rebel pitcher Luke Davis would take the final three outs upon himself by retiring the side in order to give Throsby a 16-0 win over the Mustangs.

Davis threw a five-inning shutout for Thorsby while allowing just one hit with one walk and 14 strikeouts. He also led the Rebels at the plate with a 3-for-3 performance with three doubles and three RBI’s.

Tyler Mims and Judah Day combined pitching duties for Isabella and allowed 13 earned runs on 12 hits, four walks, and six strikeouts. Dawson Edwards got the only hit of the game for Isabella.

Thorsby took down Isabella 15-5 in game two of the doubleheader.