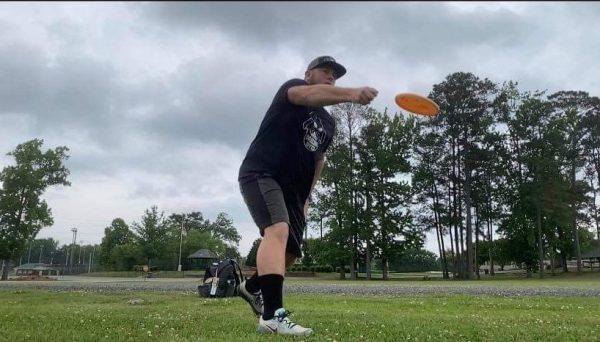 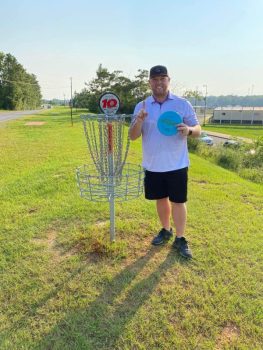 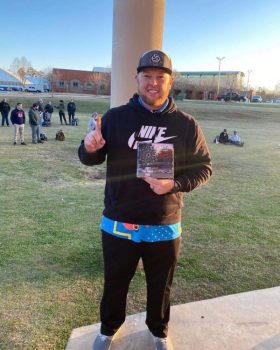 DJ Hines is on the cusp of the advanced division of the disc golf circuit. (DJ HINES | CONTRIBUTED)

After DJ Hines met his wife Ashley, the Cartersville, Georgia native, moved to Chilton County to start his family and career. Hines has since started his own disc jockey and entertainment business and welcomed two little girls into the world.

All was well in the world for Hines, however, as a former college baseball player at the University of Georgia, the urge to compete was palpable for him.

“When I moved to Chilton County, I didn’t have any sports to compete in,” Hines said. “I didn’t even really know what disc golf was.”

When the COVID-19 pandemic hit in March 2020, Hines was approached by Eddie Lightsey, the associate pastor of West End Baptist Church, about taking up disc golf. Lightsey helped Hines get the appropriate gear to begin learning the game.

“He’s like the disc golf grandpa around here,” Hines said. “He buys up a bunch of discs, teaches every age about the sport, and he set me up with my first discs and bag.”

Hines, along with some friends, played games for fun and talked a lot about starting a league in Clanton to compete in.

“Instead of talking about it, we wanted to just do it, and I just fell in love with it,” Hines said. “It’s a great way to be outside and to do something active. They have tournaments all across the world where you can go and compete, so having a sport in my thirties where I can still compete at a high level gave me that competitive fire again.”

The Clanton league was created through the PDGA website, and it officially started in spring 2021. Roughly 50-60 people came out in the spring, and around 80 participated in the fall league.

Hines, along with the help of Brian Jones of Clanton Outdoors, was able to partner with the city of Clanton to establish a public disc golf course at City Park, now known as Peach City Disc Golf Course.

After making the league, Hines had the opportunity to begin working on his craft on the disc golf course.

“I’ve started to take an intention approach to the game,” Hines said. “Making it a craft and getting, improving and working on different things.”

The league is sanctioned league, so players can earn rating points to improve their division and possibly get invited to bigger tournaments. Players in the league can partner with any other competitor and play 18 holes of disc golf.

There are four divisions in professional disc golf: novice, recreation, intermediate and advanced. Hines competes in the intermediate division, but is on the cusp of the advanced division.

“I had a pretty decent year last year,” Hines said. “This year, I’ve started off really hot, I told myself this year I wanted to go out and win some tournaments and place well in some good ones.”

Hines did just that by winning the Frostbite Open in Opelika by 12 strokes and the Fairview Freeze in Fairview by two strokes.

His performances in those events, and in the league, earned Hines enough advanced points and a spot on the PDGA Amateur Worlds invite list.

The tournament takes place in Princeton, Indiana from June 21-25 with a sixth day for the finals. Hines is still unsure if he will attend the tournament.

“It’s a lot of disc golf to play,” Hines said. “If someone could sponsor me to help me get there, that’s would be incredible. I would love to go and compete, and represent Chilton County and our community.”

Hines is hopeful that a plan will come to fruition to go this year, but also plans to get enough points throughout his tournaments this year to be invited back again.

Hines’s main goal is not to make the pro tour, but to help grow the disc golf scene in Chilton County. With no other disc golf courses within 30 minutes of Clanton, he hopes to continue to grow the city course in Clanton to “make it a gem in Chilton County and Central Alabama.”

Hines also hopes to partner with the city again to find land to build another course in the county, and also bring the sport to the high schools and lower levels for kids. He partnered with the YMCA last summer during their summer camp to conduct a disc golf day one day a week.

“Creating a disc golf culture here locally that welcomes beginners and people to play this sport that is fun and exciting is my goal,” Hines said. “Give them something to get away from life and have a good time.”

The Clanton spring disc golf league began on March 19 with Hines finishing second. More information on the Clanton league can be found at PDGA.com or the Clanton Disc Golf Community & League Facebook page.