Clowning around for a cause 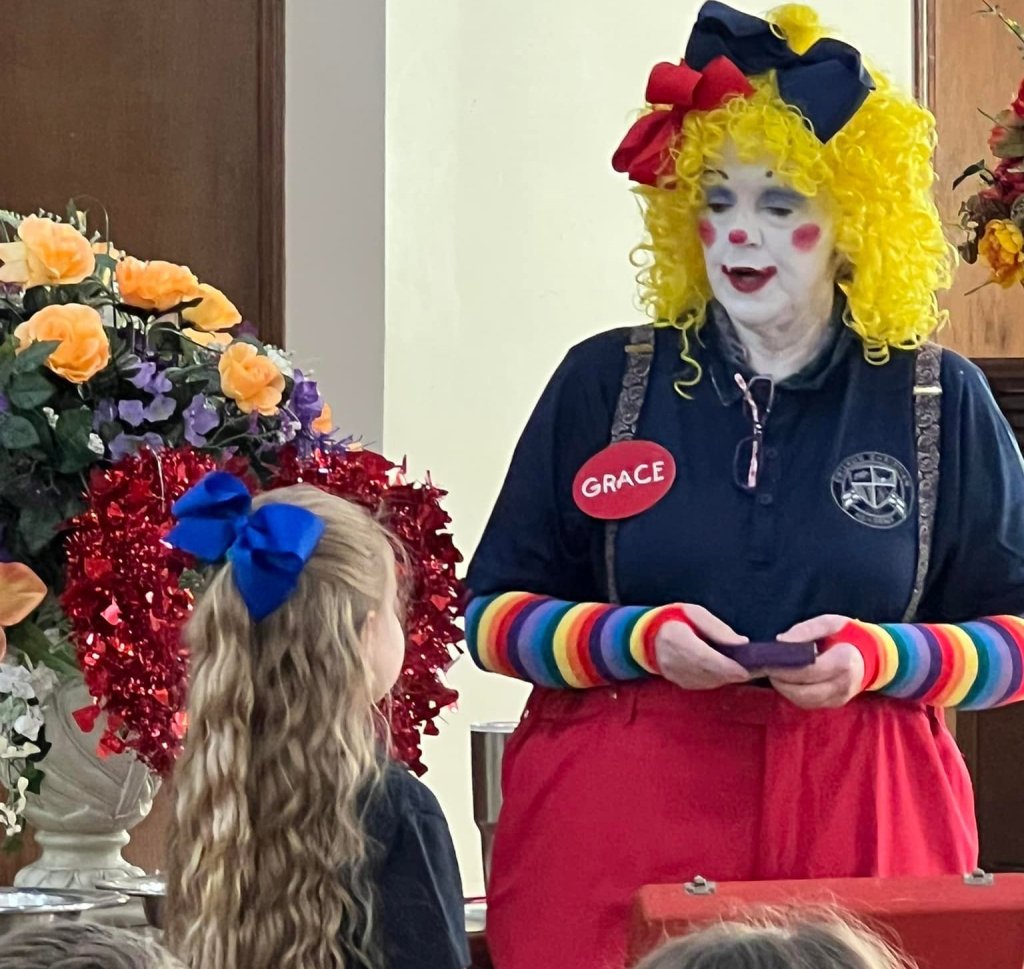 Grace the Clown performs her illusion with the help of an audience volunteer from during her recent visit to Chilton Christian Academy. (Susan McCary | Contributed)

Having devoted 34 years to education thus far, it is easy to say that Cooper resident Susan McCary loves children. McCary has spent her time in education teaching grade school, but she also enjoys teaching children about something not found in textbooks — how much they are loved. In 2012, she felt drawn and inspired by God to create Grace the clown. McCary describes herself as a conservative personality and said that becoming a clown was something that God enabled her to become.

“If you know me, you know that I am not the kind of person that could do something like this,” said McCary. “I grew up with a very strict childhood and didn’t play or ever get dirty. Becoming a clown was a thought that wouldn’t leave my mind, like a seed that had been planted by God. Grace allows me to become someone different and to show God’s love through a clown.”

McCary went to Clown Academy in Birmingham for a six-week course that taught her the art of clown make-up, jokes and costuming. Many of the Magic City clowns regularly visit Children’s of Alabama but because of distance, McCary knew visiting the hospital was not something she could do regularly. Grace began attending events such as birthday parties and fall festivals, which eventually led to giving Biblical messages during chapel time. Grace has visual illusions that she performs for the children which help her explain love and forgiveness.

“In the same way that children’s eyes light up when they are learning how to read, you can see a light bulb go off when they see the illusion,” said Grace. “Being a clown gives you a connection with kids that you can’t get any other way. People see you and instantly want to be part of what you are doing. What’s fun is driving to an event dressed up as a clown, people see me while we are at a stop light and of course, everyone smiles. A few times, I have stopped by the grocery store or bank on the way home and people love it. They follow me around!”

Although Grace is popular in most crowds, McCary said that TV and scary movies have damaged clown culture and given clowns a bad reputation.

“Since I became Grace, I have only had a few children be afraid of me,” said Grace. “In those times, I back off and just keep doing whatever task I am working on. I continue making my balloon or completing the illusion. I just give them space and make it away from the child, so they feel safe and know that I am not going to harm them.”

Grace said one of the best parts of becoming a clown is that children are drawn to sit beside her, and it allows her to share the message that “I love them and whatever they are going through is going to be okay.”

McCary is the children’s director at Chestnut Creek Baptist Church, where she said Grace plans to make an appearance soon and looks forward to sharing God’s message of love with the people there.

Susan is married to Larry McCary. They have two children and five grandchildren. Her hobbies include embroidery, monogramming and sewing.