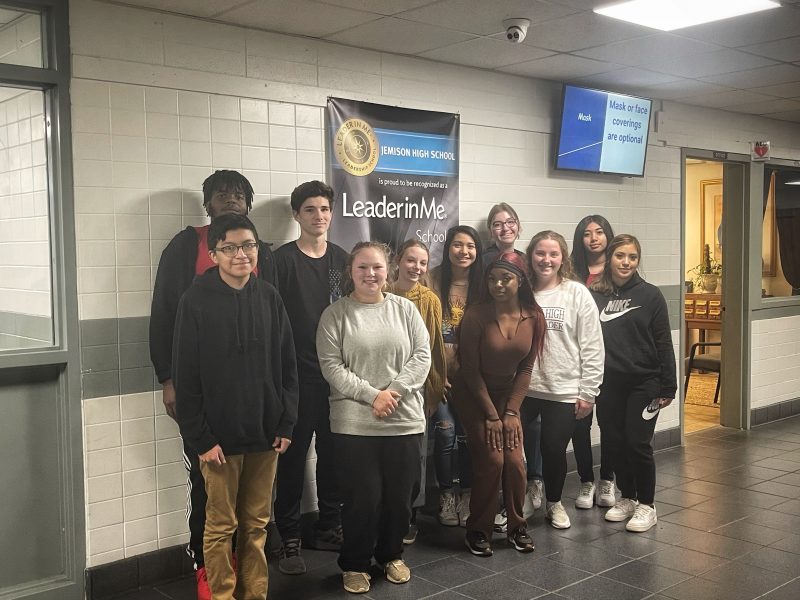 The Leader in Me Student Lighthouse Team members pose in front of their new program banner. (CAREY REEDER | ADVERTISER)

Jemison High School has established a new student-led program that hopes to improve all facets of student life on campus.

Jemison has adopted the Leader in Me program, which students will use to address the school’s culture, leadership and academics to make positive changes. The program is based off the book “7 Habits of Highly Effective Teens” by Sean Covey. Leader in Me is involved with over 2,800 schools in the United States, and has programs in schools across six different continents.

“It seeks to make improvements to the way your school operates, to improve all of those areas,” Ronnie Holsombeck, Jemison High School teacher, and Adult Lighthouse Team coordinator, said. “They’re looking at multiple areas of our campus life that fall under those categories.”

The program operates under a “see, do, and get” philosophy. Teams see the way people perceive things in the school, then implement new practices that will help improve those perceptions. Finally, the results represent the “get” portion, and then the process starts over again with a new project.

“The lighthouse team are the ones who guide the program,” Holsombeck said. “All we are going to do is facilitate what these kids want to do, sometimes it is not possible, but we’re there to tell them how to make it happen.”

The team has met only a handful of times, but has already begun planning projects. A big change the students want to see is in the accelerated classes during lunch periods. These classes give students extra help in courses, and offer students a mental outlet as well.

“We want people to be closer to each other, and open up more,” Surhi Serrano, a Student Lighthouse Team member, said. “Sometimes it’s hard for people because they don’t have that opportunity at home, so we want to set that environment at school in these courses.”

Fixing broken bathroom stall doors, changes to school schedules, adding elective courses, painting murals and planning a field day for the high school and incoming freshman students in May, have all been planned by the team. Once a project is finished, the team will create a video showcasing their work, and it can be shared among the other Leader in Me schools.

The mental health of students around the JHS campus is also a big talking point for the Student Lighthouse Team.

“I think the school in general struggles with mental health, and one of our goals is to create a more welcoming environment,” Samantha Scott, a student lighthouse team member, said. “People don’t want to be vulnerable because they think they will be seen as weak; our goal is to make it okay to reach out and have that support system.”

The Student Lighthouse Team has hung a banner at the main office, and posted posters around the school promoting the program to generate more student involvement.

“It will eventually involve the entire campus, and anyone who wants to get involved will be able to,” Holsombeck said. “This is their high school experience, and we want them to get the best out of that, not as we see it, but as they see it.”

In the future, JHS will utilize the team as school ambassadors, and they will be involved in hosting school events. The goal for JHS is to become a Lighthouse School, which is a model program for the Leader in Me program.

“We’re just now getting it off the ground, and it will be interesting to see where the kids want to go with it,” Holsombeck said. “It really does involve everybody, the community… almost like the biggest booster club you can make for the whole school.”

As the Student Lighthouse Team moves forward, the future of JHS seems to be very bright under the guidance of a very diverse and driven group of Panthers.

“I love the idea that this group is going to be all inclusive, and I love how our Lighthouse Team represents every facet of our student body,” Holsombeck said. “They all have different opinions, but they are all working toward a common goal and are supportive of each other.”