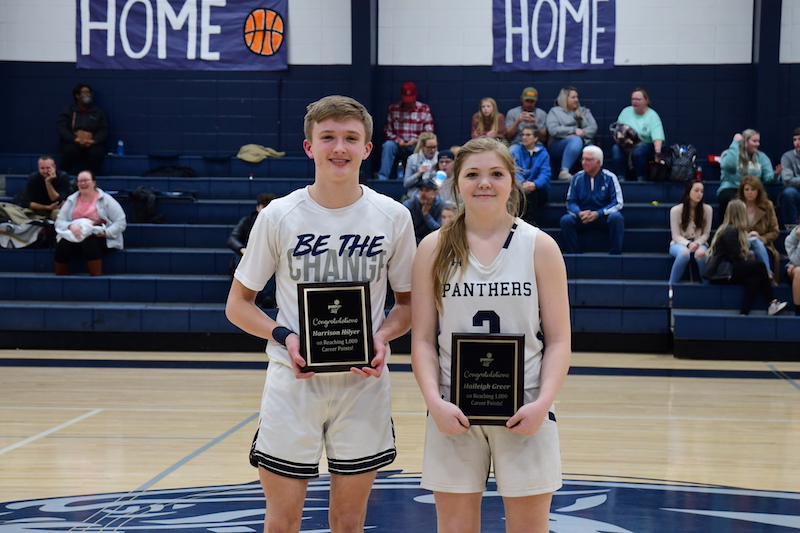 It has been a momentous senior year for Jemison High School’s Haileigh Greer and Harrison Hilyer.

Each reached 1,000 points for their varsity basketball career. Each knew they had the potential to accomplish this feat going into the season, and they were hoping to reach it.

Hilyer has averaged 20 points a game, scoring at least 30 points in three games this season.

“I hoped I was going to hit it this year, but I didn’t’ expect it when it happened,” Hilyer, who plays point guard, said. “I didn’t think it would come that early in the year.”

Despite dealing with some injuries earlier in the season, Hilyer scored his 1,000th point during the County Tournament. After playing Verbena High School, Hillyer knew he had 27 or 28 points to go.

But, next up was Thorsby High School.

“Thorsby is one of those teams that I have always struggled … playing against for some reason,” Hilyer said.

He still managed to score 24 points during the game.

Hilyer said when the team played Chilton County High School, he knew he was going to score his 1,000th point.

“There wasn’t no pressure or anything on it, because I knew it was going to happen one way or another,” Hilyer said. “It was just about going out there and playing ball and trying to get the win at the end of the day.”

Although this is JHS Varsity boys coach Ronnie Driver’s first year at the school, he knew “Harrison was a top player” even before accepting the job.

“I knew he would be one of those players that I would love to coach, and he has been a coach’s dream,” Driver said. “He is the first one in the gym. He is the last one to leave.”

Greer, who plays point guard, has averaged over 18 points a game this season.

“We lost four seniors last year, so coming back, she had to take on a bigger load,” JHS Varsity girls coach Kelsey Mims said. “She has gotten a lot more attention from defenses …, but she has still been able to score more points than she did last year. She is one of those that is never going to give up.”

Greer said hoping to reach 1,000 points has been added motivation this season.

In a recent away game, she scored 50 points. Going into that game Greer had only needed 52 points to reach 1,000.

“When she got to 50, I pulled her out because I knew she could get the two points at home on senior night,” Mims said.

Greer reached this milestone during the game JHS’s varsity basketball senior night with two free throws after she got fouled.

Plans for playing on the collegiate level are in the works. Greer has signed with Huntington College, where she plans to begin her studies to be a nurse. Hilyer said some colleges have expressed interest, and he hopes to have an offer soon. He plans to study education and coaching or pursue becoming an athletic trainer.

Driver said Hilyer would be a good college athlete “because he is going to love the game and respect the game and the game loves him back, just because of the work he puts in.”

“I just hope our high school and our community appreciates what he has been able to do,” Driver said. “… He has represented his school and his community first class.”

Greer said she has enjoyed the people she has gotten close to while on the team.

“I have played with half of them forever,” Greer said.

Hilyer said the coaching staffs and the players that he has played with through the years are what he has enjoyed most.

“I couldn’t have asked for a better coaching staff (or) better teammates,” Hilyer said.

Hilyer’s interest in being on a basketball team started in third grade when he attended a friend’s Upward basketball game. He said his father and grandfather had tried to encourage him in the sport, but that day really sparked his interest.