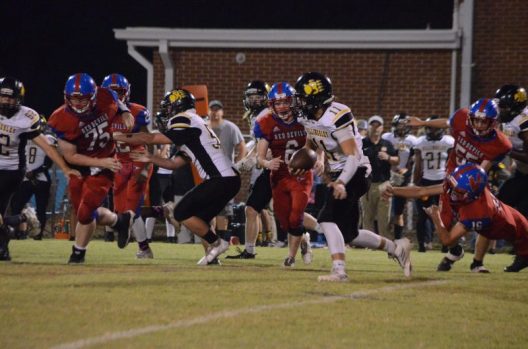 Billingsley quarterback Levi Arington runs for a first down in the Bears’ win over Verbena. (ZACHARY SEIFTER/ ADVERTISER) 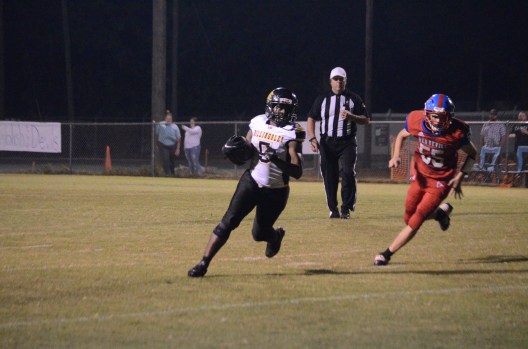 Billingsley defeated Verbena by a score of 47-8. The win ended a five-game losing streak for the Bears. (ZACHARY SEIFTER/ ADVERTISER)

Billingsley High School picked up a much-needed road victory over Verbena High School on Oct. 1. The Bears defeated the Red Devils by a score of 47-8.

The win ended a five-game losing streak for the Bears and improved their record to 2-5. Verbena’s record dropped to 4-3 with the loss.

Not much went right for Verbena in the game. Self-inflicted wounds caused the game to get out of hand in the first quarter.

Many of those mistakes happened on special teams. Billingsley opened up the game with a kickoff return for a touchdown. Minutes later, the Red Devils set up the Bears with great field position after DJ Jackson fumbled the ball on a punt return.

The end result was a 26-0 lead for the Bears at the end of the opening quarter.

“Our special teams has been really good all year,” Verbena head coach Allen Brothers said. “… It really hadn’t been that bad of an issue and then tonight it was just … we came out flat.”

Along with the special teams issues, Verbena was not getting it done in the other two phases of the game.

Billingsley was the more physical team, dominating the line of scrimmage. The Bears’ offense hummed most of the night, picking up yards in chunks. The defense, meanwhile, was outstanding, shutting down a Red Devils rushing attack that had seen a lot of success thus far this season.

Billingsley will try to continue its success next week as the Bears host Autaugaville High School in a big regional game.

Verbena, meanwhile, will hit the road to face off against Loachapoka High School next week.