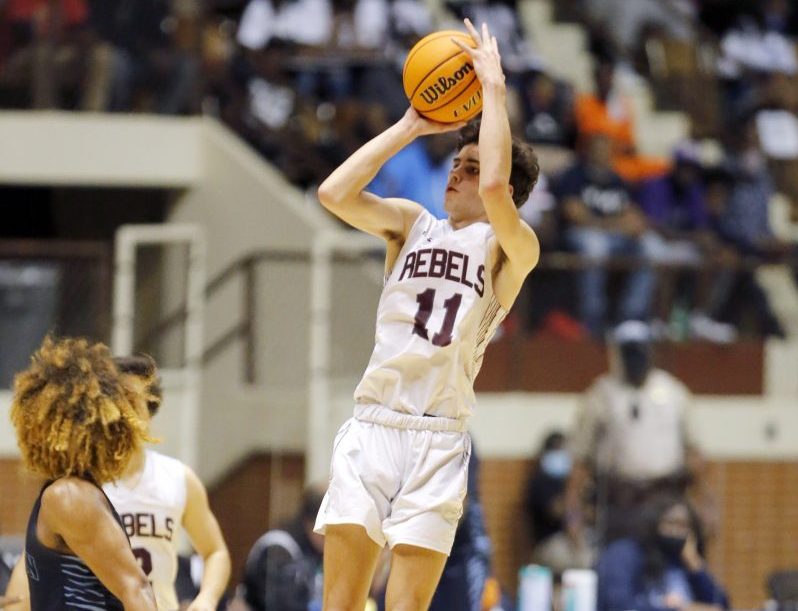 The Alabama High School Athletic Association discussed the possibility of implementing shot clocks for all varsity basketball games at its media day event on Aug. 17. (FILE)

The Alabama High School Athletic Association held its annual media day event on Aug. 17 and discussed a variety of topics.

Among the topics discussed with media members was the possibility of implementing shot clocks for all varsity basketball games in the state as early as the 2022-2023 season.

It is a topic that is certainly intriguing for many programs in the state, but also could be troublesome for others.

For larger programs, implementing a shot clock may be a great development. It would possibly decrease the amount of upsets, as teams with less talent cannot just hold onto the ball without shooting for large portions of a game.

Jemison High School, a 5A program, is a school that could stand to benefit from shot clocks.

“It’s something that I’m really … wanting my players to be able to experience,” JHS basketball coach Ronnie Driver said. “To me, it’s only going to help our program be able to grow (and) help other programs be able to grow as well from a skill development stand point.”

Shot clocks add a different dynamic to the game of basketball, but they also cost money for schools to add to their gyms. The AHSAA estimated that it would cost somewhere around $5,000 for schools to put them in. While larger schools can afford to do this, it will be a struggle for some smaller schools to make this happen.

“The only reason I am against it is due to money,” Maplesville basketball coach Stacy McGeehee said. “As a 1A school, we’re having a hard enough time breaking even on a game night, so to have to pay the cost of getting the equipment … and going to have to find either someone to run the clock or for it to be an official (is) $30 extra a game to run it, (that) is the biggest downfall with it.”

For the AHSAA to be able to implement shot clocks at all varsity games, it will need two-thirds of the principals in the state to vote in favor of it. Otherwise, it will not happen.

Also discussed at the meeting was a new pilot flag football program in the state. The pilot program will last for only a few years. If schools in the state are receptive to it and it does well then it could stay permanently.

The AHSAA also discussed its instant replay pilot program for high school football. The program is in its final year, and the AHSAA will make a decision on whether to have instant replay available across the state or not based on the data it collects this year.