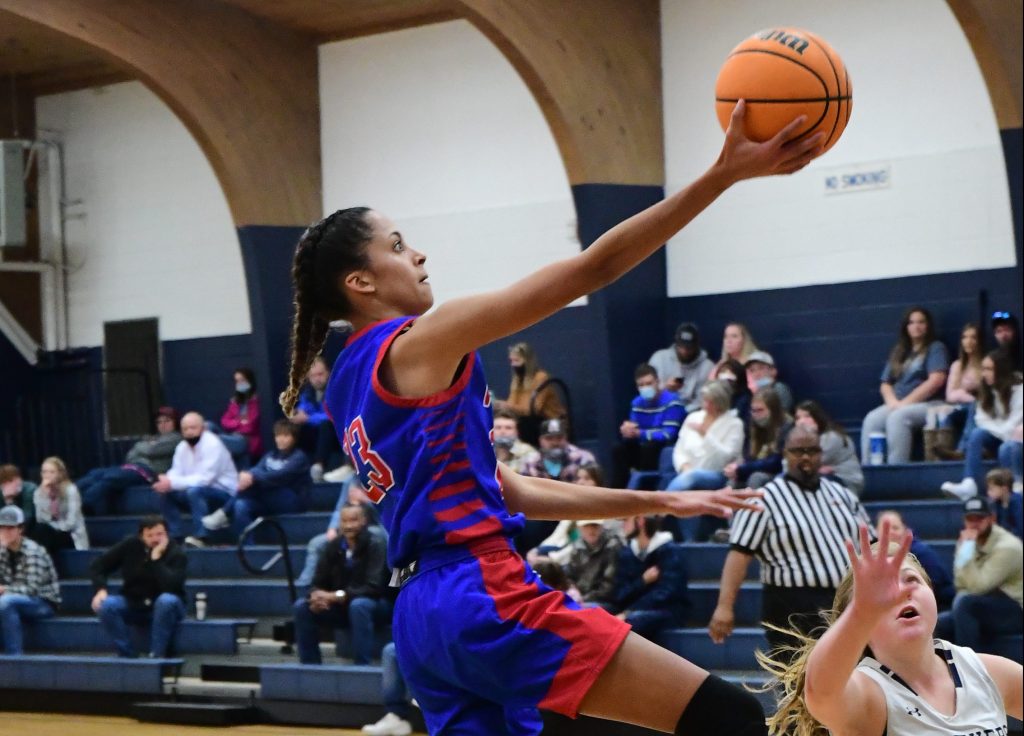 Verbena’s Jasmyn White drives to the basket for two of her 37 points against Jemison in the opening round of the county basketball tournament on Jan. 4. (Photo by Anthony Richards)

The Verbena Red Devils girls basketball team withstood a late rally by the Jemison Panthers to win 44-41 and advance to the semifinals of the 2021 Chilton County Basketball Tournament.

Verbena was clicking early on at both ends of the court and was able to build a 25-17 halftime lead as a result.

The VHS lead grew to double digits thanks to a 37-point night by Jasmyn White.

White and the Verbena offense did an excellent job of attacking the basketball and she was able to convert several old-fashioned three-point plays throughout the contest.

“I try to get fouled as much as I can, because I know when I get to the line they’re (free throws) going in,” White said.

However, the Verbena offense went stagnant in the fourth quarter and the Panthers outscored the Red Devils 17-2 in the final stanza.

“We were up big and started taking possessions off,” Verbena head coach David Sneed said. “I’m just glad that I’ve got a good group of seniors that can go back out on the floor and close out the game.”

Jemison’s comeback bid was fueled by a rash of three-pointers, including a pair of fourth quarter long-range bombs by Ashlee Hilyer, who finished with 11 points on the night, all of which came in the second half.

Sneed is aware that his team was fortunate to escape with the victory and understands that finishing games is key moving forward in the county tournament and the season.

“When things were going right, we were running our offense like we were supposed to, passing and cutting hard to the basket,” Sneed said. “That cut was there pretty much every time, especially the way they liked to spread out on defense.”

However, Sneed thought when Verbena slowed the pace or got lazy with their passing, that is when they lost their rhythm offensively.

Dakota Adams knocked down a three-pointer to beat the buzzer at the end of the third quarter for Verbena, while Jaclyn Lowery scored a team high 12 points for Jemison.

With the win, Verbena secured a matchup with Chilton County High School in the semifinals on Jan. 7 at 6 p.m. at Jemison High School’s gym.

Tickets must be purchased through the GoFan app or website. Walkups will not be admitted.