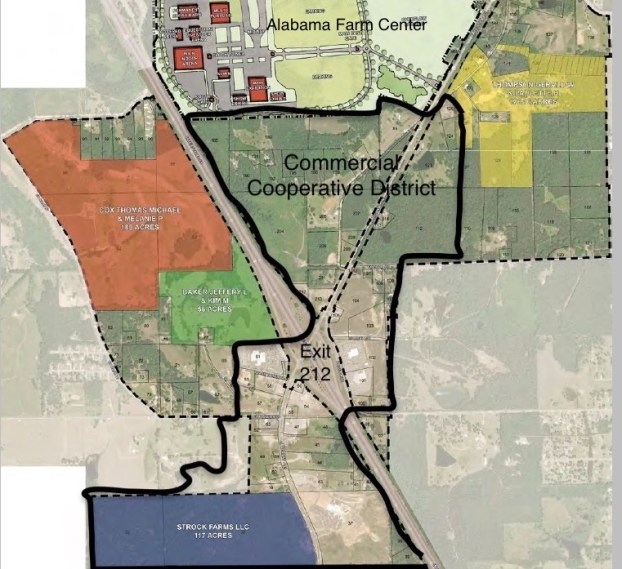 The Clanton Commercial Cooperative District adopted addendums extending the purchase option agreements on two pieces of land in the Exit 212 corridor during a meeting on Dec. 16.

The property is within the Commercial Cooperative District boundaries. The initial contracts for purchasing the 43 acres were accepted by the district on Oct. 21.

The Clanton City Council had already approved the agreements negotiated by Mayor Jeff Mims to extend the inspection time for the properties.

According to the addendums, the city has paid $27,500 in nonrefundable earnest money for the purchase options. The total purchase price has been listed as $3.2 million. This would be purchased with a bond issue that could then be repaid as the land is sold to developers.

If the purchase of the property is not completed by then, the agreements will expire.

“That gives the mayor and the new council plenty of time to continue to look for developers or any opportunities,” Price said.

The Clanton Commercial Cooperative District was formed to facilitate the development of a specific section of the Interstate 65, Exit 212 corridor in line with the formerly adopted corridor master plan. The hope is to create opportunities for those visiting the planned Alabama Farm Center at Alfa Centennial Park to spend money in Chilton County, thereby generating tax revenue, while creating more opportunities for those who live here.

The city has contracted with NextSite to work with prospective retailers to establish in the district.

Creating the cooperative district makes certain incentives available to developers who build within the district. These incentives could be negotiated by the Capital Improvements Cooperative District board but would require approval from the Clanton City Council to go into effect.

A separate cooperative district has been formed for the future site of the Alabama Farm Center at Alfa Centennial Park.

By JOYANNA LOVE/ Managing Editor The Chilton County Board of Education is moving forward with roofing projects at Thorsby High... read more