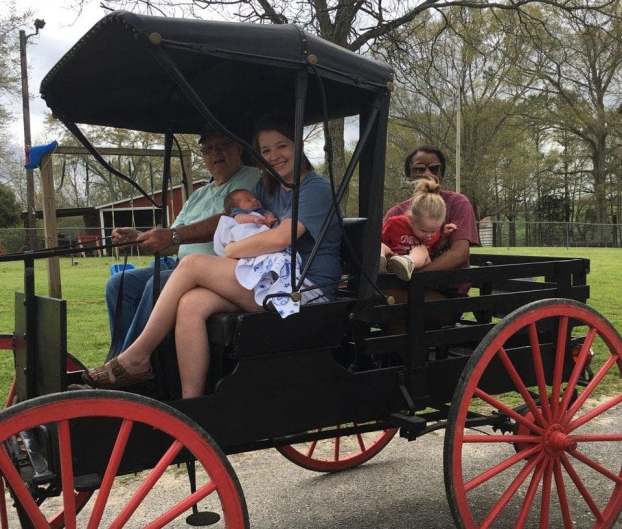 Over the hills we go

Driving horse-drawn carriages during December is nostalgic and has been embedded in Christmas Americana since 1857 when “Jingle Bells” was first released.  James Earl and Ann Davenport of Jemison have loaded up their Christmas carriage for decades and take casual rides through the countryside and into Jemison and Thorsby.

“It is relaxing and slows everything down,” said James Earl. “You miss so much when you are going fast in a car.”

When James Earl returned to Chilton County from the Army in 1971, he and Ann decided to get horses and train them.  After being married for 56 years, the Davenports still train horses and mules to pull weight and to be hitched to carriages. Although James Earl has participated in parades, these days he and “Tony the Horse” only ride locally. Their treks can be up to 20 miles long in one day.

“It takes me about an hour to ride into Thorsby,” said James Earl.

Davenport uses a two-seater Amish buggy and his Amish-trained, American saddle-bred horse, “Tony” to lead his merry coach around town. Whereas American carriages are engineered for working, Amish carriages are designed for comfort to take the family to town. He purchased his carriage from the Amish community of Etheridge, Tennessee.

“The back of my buggy has a bed that allows Amish families to load their groceries there and ride back home,” said James Earl. “Even though mine is a two-seater, I have two wooden chairs in the back so that I can comfortably ride two adults and two children.”

When riding down the highway, the Davenports frequently witness cars that are coming in their direction come quickly to a halt and jump out of their vehicle to take pictures. Through the years, they have also been part of other interesting carriage happenings.

“One time, we were driving down the road and a state trooper got behind us,” Ann said. “We turned around, and he had his lights on.”

“We pulled over, and I told him that I knew we weren’t speeding so what was the problem,” said James Earl. “He pulled us over because we didn’t have the triangle sign on the back of our carriage. He was nice and just gave us a warning.”

During James Earl’s work career as a truck driver in Calera, he requested off from work one day to go to the dentist to have a piece of dental floss removed from between his teeth.

“My boss approved my ‘time-off’ request. Early the next day, the dental floss came loose on its own,” said James Earl. “Since I had already taken the time off from work, and it was a pretty day, I decided to hitch up the carriage and go for a ride. A friend and I were riding down the road when a man pulled over and wanted to take our picture. I let him, not thinking anything about it. The next day we were on the front page of The Birmingham Post Herald! My employer brought it to me and wanted to know about it and why I didn’t go to the dentist.”

James Earl mainly rides to old town Jemison, Thorsby and the Landmart area, sometimes just for the pleasure of enjoying nature and purchasing a Coca-Cola from town.

Tony is trained to ride without distraction so dogs or passing vehicles do not disturb him, although James Earl said some automobile drivers are not courteous drivers and endanger others.

“When an 18-wheeler passes us, it will spook my wife, but it doesn’t spook Tony,” said James Earl.

By Billy Singleton/ Community Columnist Strolling along Second Avenue North on a cold winter morning I am reminded of the... read more