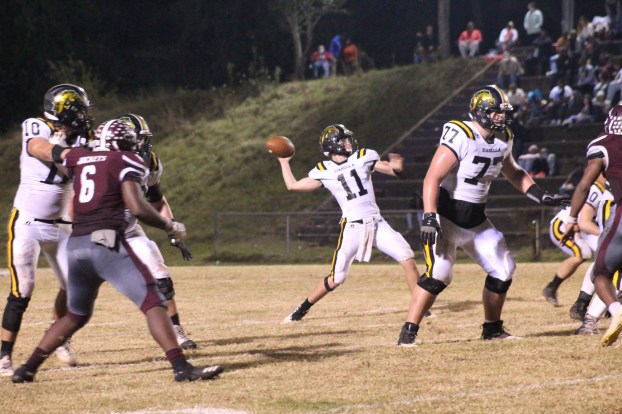 Isabella’s Jake Logan throws a pass against Abbeville in the third round on Nov. 20. (Photo by Kristin Wilson/Special)

Isabella’s football season came to an end after a 38-20 loss on the road to Abbeville in the third round of the Class 2A playoffs.

The Mustangs did not go down without a fight and led 7-6 at the end of the first quarter and only trailed by one score at the halftime break (20-14) and after three quarters (26-20).

However, Abbeville won the fourth quarter by outscoring IHS 12-0 and won the game as a result.

Jake Logan punctuated a fabulous senior season as Isabella’s starting quarterback with 141 passing yards and a touchdown to go with 25 rushing yards and another touchdown on the ground. 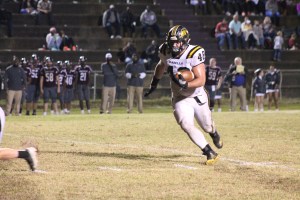 Anthony Fjeldstad carries the ball. He finished with 20 receiving yards and ran for a score. (Photo by Kristin Wilson/Special)

Logan’s main target during the contest was Austin Jones, who had 90 receiving yards and hauled in a touchdown.

Jones also made plays on the defensive end with an interception on the night.

The tight ends proved a valuable part of the game plan for the Mustangs, as Anthony Fjeldstad and Kaleb Brasher each had 20 receiving yards.

Fjeldstad also powered in for a rushing touchdown.

Isabella was led on the ground by J.J. Wilson, who finished with 63 rushing yards. Zac Chapman had 16 yards rushing before leaving the game with an ankle injury in the first quarter.

It was just the Mustangs second loss of the season, the first coming against Fyffe in the season opener. Isabella finished with a record of 10-2.

The Maplesville Red Devils lost a 21-19 nail-biter to the Brantley Bulldogs in the third round of the AHSAA Class... read more