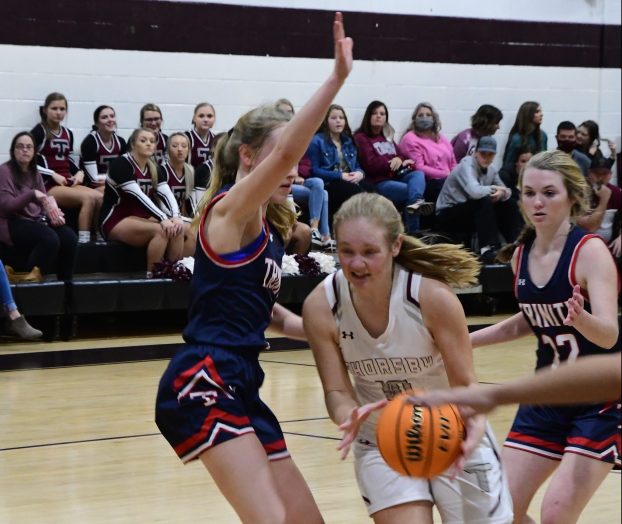 Carlee Wyatt attempts to split Trinity defenders during a game on Nov. 17. (Photo by Anthony Richards)

It was a long night for the Thorsby girls basketball team, which lost 63-19 to Trinity Presbyterian School of Montgomery on Nov. 17.

The Rebels struggled to keep pace with the hot-shooting of Trinity.

Much of the lack of offensive rhythm can be attributed to a Trinity pressure defense that forced Thorsby to be turnover-prone throughout the night.

As a result, the Rebels did not score their first points until Carlee Wyatt drove in for a basket with three minutes left in the second quarter. She was fouled on the play and sank the free throw to convert the old-fashioned three-point play. 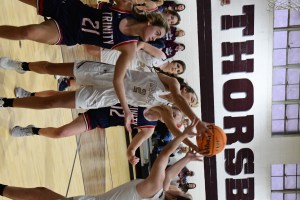 Emily Jones hauls in a rebound against Trinity. (Photo by Anthony Richards)

Wyatt’s bucket sparked some life into the Thorsby attack as she followed it up with another two points, while Madisyn Ellison connected on a layup, and Carrie Farris put back an offensive rebound.

Thorsby trailed 37-9 at halftime and 48-16 heading into the fourth quarter.

Wyatt provided a majority of the Rebels production with a team-high 12 points.

With the loss, Thorsby dropped to 1-1 on the young season.

According to Wood, playing tough teams is one of the best ways to prepare for the postseason, and he hopes his team learns valuable lessons from the loss.