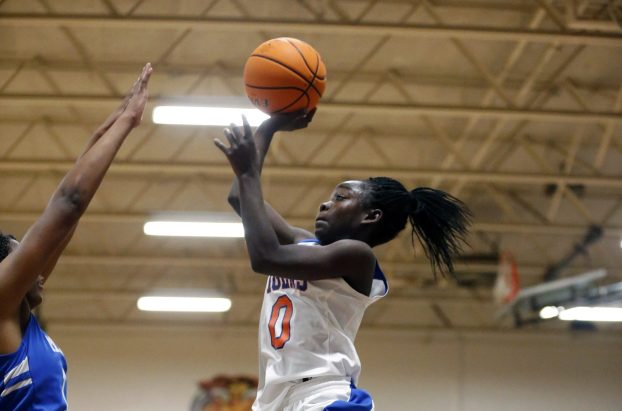 Iasia Anderson led all scorers with 23 points in CCHS’s win over Thompson on Nov. 16. (File photo)

Two games into the season and Chilton County High School’s girls basketball team already has a statement win under their belt.

To most, that may be considered an upset, but according to CCHS head coach Paul DuBose his team viewed it as well within their grasp.

“Having a belief that we can compete against everyone is big,” DuBose said. “It’s the reason we won.”

The victory demonstrates that the girls basketball team is farther along than they were at this point last season, which also shows the strides DuBose has made only two games into his second season at the helm.

CCHS led 30-23 at halftime and was able to pull away in the third quarter as they outscored Thompson 15-8 in the frame.

“We had the lead, but we knew we had to go back out and keep fighting,” CCHS senior Kelsey Cleckler said.

Cleckler is one of four seniors on this year’s squad. She tallied eight points in the contest.

Iasia Anderson led all scorers on the night with 23 points to go with five steals, four rebounds and three assists.

Marlie Giles, Tyonna Booker and Tyeshia Williams were a relentless triple threat on the boards with 15, 10 and 8 rebounds respectively.

Giles added 11 points along with her 15 boards and finished with a double-double.

One of the new things DuBose is implementing this year is a substitution pattern that involves sending in new players at every stoppage of play.

“It is different, but it has been real useful,” Cleckler said.

“This year an emphasis for us is breaking presses because we know teams are going to want to do that against us,” DuBose said. “It has helped keep us fresh, and the girls love it because it keeps them involved in the game.”

The game had an interesting feel surrounding it, because the varsity girls game was the only scheduled affair that night.

“It was nice to be the only show in town,” DuBose said.

Thorsby senior Tanner Jones has been playing baseball since he was 5 years old and will be living out one... read more