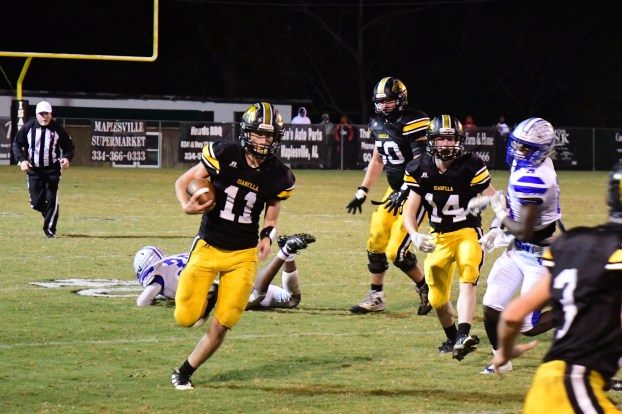 Jake Logan carried the load in the win against Clarke County with 248 yards and two touchdowns on 39 carries. (Photo by Anthony Richards)

Isabella played stellar defense and Jake Logan was the focal point of the offense as the Mustangs defeated Clarke County 20-13 in the second round of the Class 2A playoffs on Nov. 13.

Brett Johnson dropped back into coverage and broke up a pass at the goal line on a fourth down with 3:31 left in the game to secure the victory.

“They were one of the best teams in the dang playoffs, and our moto was ‘don’t flinch,’” Isabella head coach Tate Leonard said. “We didn’t flinch.”

The offensive game plan was fairly obvious from the start, as they leaned on Logan and the offensive line, and yet Clarke County had little answer for it all night.

“We were the most physical team all night, and that’s what got us the win,” Leonard said. “We ran right at them. They knew what was coming and they couldn’t stop it.”

As a result, Logan ran for 248 yards and two touchdowns on 39 carries.

Logan thrived with the heavy dose of carries the coaching staff was giving him and the continuous push he was getting from his big guys up front. 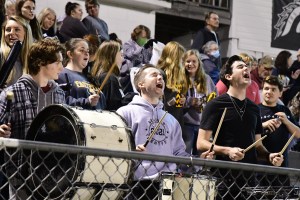 The Stampede student section provided an excellent homefield advantage for the Mustangs. (Photo by Anthony Richards)

Anthony Fjeldstad punched in a 1-yard touchdown run for Isabella’s first score with 59 seconds remaining in the first half.

However, after a missed extra point the Mustangs trailed 7-6 at halftime.

Other than a long touchdown run on a two-play drive on Clarke County’s first offensive possession, the Mustang defense was able to limit explosive plays.

The win was Isabella’s 50th in the past five years, which was something Leonard made sure to share with his team on the field after the game.

“That shows how hard these kids have been working,” Leonard said.

The Mustangs are two wins away from competing for a state title. Next up, they will travel to face Abbeville, who defeated Comer 56-34, in a third-round matchup.

“The key now is to be humble and hungry, because everybody is going to talk about how good we are,” Leonard said. “We’re going to enjoy it for about a day and then get back to work.”

Maplesville impresses in first round shutout

The Maplesville Red Devils handled business in the first round of the Class 1A playoffs with a resounding 41-0 victory... read more