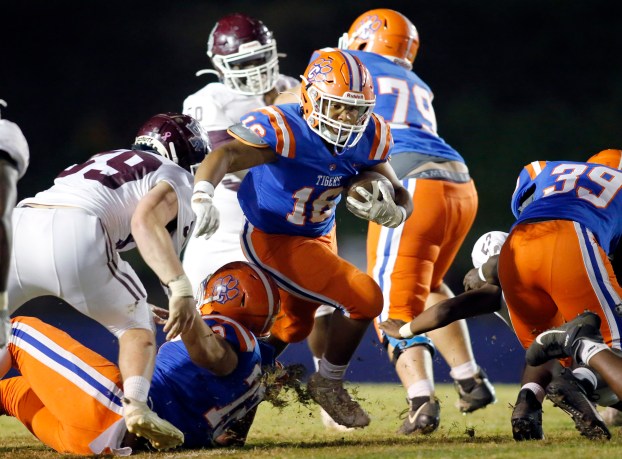 Tigers lose close one on homecoming

A bittersweet end to homecoming week befell Chilton County High School on Oct. 16, as the Tigers put a wrap on this year’s home football schedule with a 34-28 loss to the Benjamin Russell Wildcats.

A quick three and out by the Tigers to start the matchup would hand the ball over to Benjamin Russell at their own 16-yard line where the Wildcats would start their first possession of the night.

A 39-yard opening run by Demarcus McNeal would get things started and would move the Wildcats across midfield while passes of 19 and 11 yards by quarterback Carter Smith would move Benjamin Russell down inside the red zone.

Three plays later, and a connection from Smith to Freeman would make it an early 7-0 Wildcat lead.

Another three and out by Chilton County would see the Tigers forced to punt from their own 31-yard line where Ensley Goggans would field the punt at his own 35-yard line and would take it 65 yards for a Wildcats touchdown that would make it 14-0 in favor of Benjamin Russell, midway through the first.

A third consecutive three and out by the Tigers would see Benjamin Russell set up first and ten at their own thirty-three where yet another scoring drive by the Wildcats would ensue with a 78-yard touchdown connection from Smith to Goggans that would make it 21-0 late in the first quarter.

Turnovers would take center stage on the ensuing possessions for both teams as a Chilton County fumble would set the Wildcats up first and 10 at the Chilton County 23, but two plays later it would be a fumble by Benjamin Russell that would be scooped up by Travon Bostic and returned eighty yards for a Tiger touchdown that would put Chilton County on the board, 20-7. 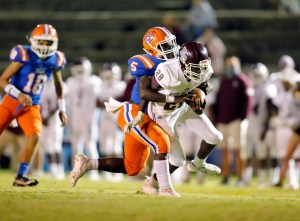 The Tiger defense would step things up on the ensuing Benjamin Russell possession and would force the first Wildcat punt of the night that would set the Tigers up first and 10 at their own 33. From there a 15-play, 66-yard scoring drive would ensue that would be capped off on a 12-yard touchdown pass from quarterback Sam Smith to tight end Hunter Ousley to make it 20-14 at the half.

The third quarter of the contest would come and go quietly as defense would become the theme of the quarter, while with 11:04 remaining a 19-yard touchdown run by Dontarious Thomas would push the Wildcats out in front 27-14.

A pair of scoreless possessions by both teams would proceed another quick strike by Benjamin Russell as a 40-yard touchdown connection between Smith and Marcus Freeman would make it a 34-13 Wildcat lead with 3:03 remaining.

With 3:02 remaining, the Tigers would make a change at the quarterback position as Cannon Miller would be called on to take over the helm for Chilton County. Miller would lead the charge with a pass completion of 23 yards to Jakeveon Bolding for a touchdown that would pull the Tigers to within two scores, 34-21, with 1:59 to play.

With an onside kick being recovered by Chilton County, the Tigers would set up their offense near the midfield stripe.

Five plays later and another touchdown connection between Miller and Bolding would make it a one score game with 1:49 to play.

Another attempted onside kick by the Tigers would be covered this time by the Wildcats were four plays later, a kneel by Smith would bring the game to its final with Benjamin Russell escaping with a 34-28 victory over the Tigers.

In just one quarter of play, Miller would lead the Chilton County passing attack with 95 yards on six of 12 passing with two touchdowns.

Kevin Staffney would lead the Tigers on the ground with 44 yards on seven carries.