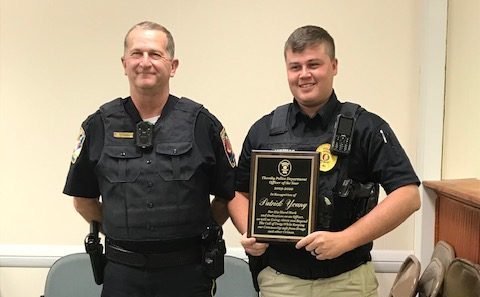 Patrick Young is the Thorsby Police Department’s 2020 Officer of the Year. (Contributed photo)

Patrick Young was recently named the Thorsby Police Department’s Officer of the Year for 2020.

Young joined the TPD as an officer in February 2019 after previously serving a similar role with the Bessemer Police Department.

He first joined the department as a school resource officer but was moved to the role of a patrol officer after six months.

According to Thorsby Police Chief Rodney Barnett, Young is worthy of the award and has made an impact in his short time with the department.

“His character is what makes him the officer he is,” Barnett said. “He has a calm demeanor about him and often has a smile on his face, which is a big deal.”

Young’s impact includes involvement in multiple drug cases that have led to the prevention of several dangerous and illegal drugs from being sold and used within the Thorsby community.

According to Barnett, of Young’s nearly 300 cases he has been part of with the past year, about 83 of them have been drug related.

“We all probably know someone that has drug problems,” Barnett said. “Due to his (Young’s) efforts, he has made it a lot safer.”

Several of the cases qualified for drug trafficking charges for those involved, due to the quantity of drugs confiscated by Young.

The Thorsby Town Council has joined Barnett in commending Young for his continued dedication, persistence and proactive patrolling with the goal of keeping Thorsby residents safe.

“He’s a proactive police officer,” Barnett said. “The town is well suited with him patrolling the streets.”

The 2020 Thorsby Swedish Festival has been rescheduled for Oct. 17 due to inclement weather expected this weekend from Hurricane... read more