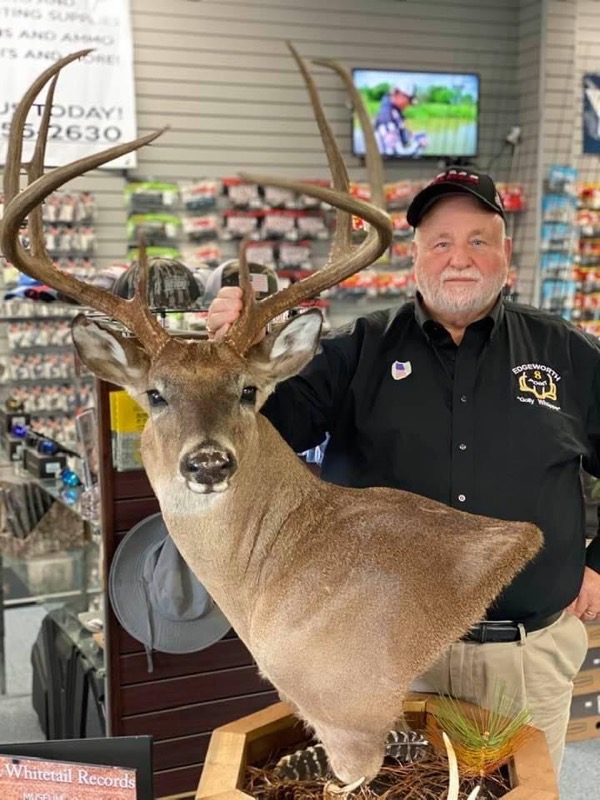 Wayne Edgeworth of Clanton has traveled to sports and outdoors shops throughout the state with his state record scoring deer. (Contributed)

Deer season is right around the corner with bow season starting on Oct. 15 in Chilton County.

However, rifle hunter Wayne Edgeworth of Clanton is still riding the high from a record setting harvest last season.

Edgeworth harvested a record setting deer he had been watching for years on his property in Linden, Alabama on Jan. 17.

Despite doing everything possible to attract the deer, Edgeworth said he never saw the deer during the day until he prayed that God would give him this buck.

“I have this deer on camera since he was 3 ½ years old only at night,” Edgeworth said. “… Now he is 7 ½ years old. I have done everything that you could do to get that deer in the daylight. I could not get him in the daylight hours.”

While watching the deer grow, Edgeworth called it Gollywhopper.

Edgeworth had purchased property in 2002 and started managing it to be a good habitat for deer. Waiting until the deer are at least four and a half years old, at least 20 deer have been harvested on the property.

In November 2019, Edgeworth was in his “hunting house” and prayed, “Lord, please grant me this deer. I want this deer so bad, Lord.”

As the season went on, he started to think someone else had already gotten it. However, on Jan. 16, Edgeworth had the distinct impression he should get up early to go hunt. Soon after he got to his hunting spot just after daylight, he saw Gollywhopper. Edgeworth took the shot and had to take another to bring him down.

“He looked like an elk laying there,” Edgeworth said. “He weighed 234 pounds, and I could barely drag him out of the field by myself … The good Lord granted my prayer.”

The deer was taken to the official Alabama Whitetail Records scorers the same day it was harvested and certified with a typical eight-point score of 175 1/8 based on the buck’s main frames and a nontypical nine point 176 4/8.

Scoring 150 gets a deer in the record book, Edgeworth said.

A Facebook Live video of the scoring went viral with one million views.

“This deer has transformed my life,” Edgeworth said. “I didn’t really know when I ask the Lord to grant me this prayer that God already had a plan.”

He said the experience has given him a personal testimony of God answering a prayer and given him a way to be more outgoing about his faith.

Since the official scoring, Edgeworth has toured the region with the stuffed head and antlers at sports and outdoors stores as well as feed stores. These opportunities have also given him a platform for sharing what God has done for him. He has also been a guest on seven podcasts.

Edgeworth said his pastor helped him create a brochure to give out at events, since there is often not a lot of time to talk to each individual person.

“It has been an outstanding ministry for me,” Edgeworth said.

He said God has channeled his passion for getting Gollywhopper into “harvesting the lost.”

Edgeworth had an interest in hunting from a young age. He killed his first deer at the age of 14 with his brother and has enjoyed deer hunting ever since.

Chilton County has one of the best rest areas in the state, and the award is now there to back... read more