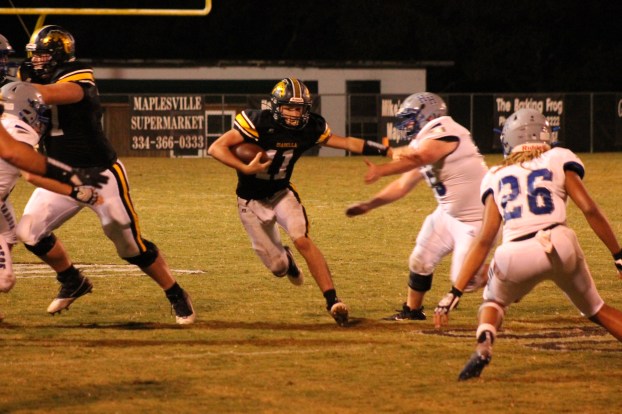 It was a dominant night for Isabella on both sides of the ball, as the Mustangs defeated Highland Home 56-26 at home on Oct. 2.

Senior quarterback Jake Logan was a nightmare for the Highland Home defense and finished with 184 rushing yards and two touchdowns on 18 carries.

Logan and the Mustangs had such success on the ground that they only attempted three passes on the night.

However, two of his three passes, including one that went 39 yards to Austin Jones.

J.J. Wilson also had another huge night rushing the ball. He was four yards shy of reaching the century mark for the game. 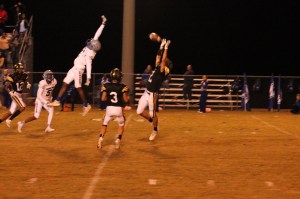 Austin Jones goes up to catch one of just three passes the Isabella offense threw on the night. (Photo by Kristin Wilson/Special)

Wilson, Jones, Braxden Giles and Zac Chapman all ran for a score on the night.

Defensively, Isabella’s performance is far more impressive than the 26 points surrendered may indicate, as the majority of those points were scored late in the game when the game was far out of reach and the Mustangs had several reserves in the game.

Four different Mustangs picked off passes in the game, as the secondary disrupted Highland Home’s passing attack on a regular basis.

One of the interceptions was by Eric McNatt, who returned it 50 yards for a score.

Isabella had nine sacks in the game led by Caleb Washington’s three.

The Jemison Panthers lost 46-19 at home to Selma in a region contest on Oct. 2. However, despite the loss,... read more