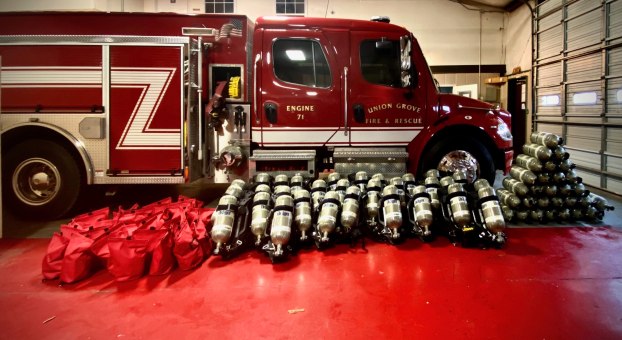 New self-contained breathing apparatuses are one of several upgrades Union Grove has received thanks to grants in recent years. (Contributed photo)

Union Grove Volunteer Fire Department received a $975,400 grant from the U.S. Department of Homeland Security to replace its current ladder truck which was built in 1971.

It will probably be another year before the department gets the new ladder truck because it has to be custom built.

Once the new truck is completed, it will be up-to-date with all of the new National Fire Protection Association standards.

According to Union Grove Fire Chief Robin Ellison, one of reasons the grant was applied for was because of the anticipation of the construction of the Alabama Farm Center at ALFA Centennial Park and the various ways that the new ladder truck could be utilized to keep the expected influxes of people in the county safe.

“There’s no way in the world we would be able to these major upgrades without the help of all the local senators and representatives speaking up and helping volunteer fire departments,” Ellison said.

He also thanked FEMA for its continued support.

The ladder truck grant is just the latest that Union Grove has received over the past three years. 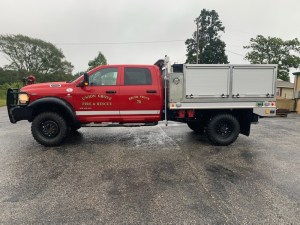 The brush truck arrived within the past week.

As a result, the volunteer fire department has been awarded a little more than $1.5 million in an effort to make life safer for residents and its personnel.

“If it wasn’t for our volunteers, we would not be able to protect the community and county when called upon,” Ellison said. “Volunteer firefighters are a special breed of folks that have the compassion to help their community in every way possible.”

Ellison used to write the grant applications himself, but it has gotten more detailed over time. He made the decision to hire a grant writer to do task similar to what many of the other fire departments in the area are also using.

It seems like that decision has begun to pay off in a big way in recent years.

“The grant writer we’ve been using has been doing a pretty good job,” Ellison said. 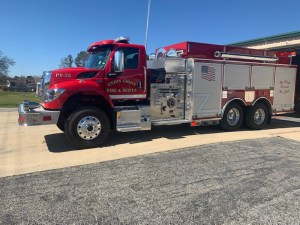 Union Grove has received a little more than $1.5 million in grant funding in the last three years, which included a new pumper tanker. (Contributed photo)

The continued support shown from the grants is something Ellison has seen be appreciated by his members.

“They’re tickled to death over all of it,” Ellison said.

Union Grove currently has about 25 members in its department, which has two stations in Jemison with one along County Road 51 and another on County Road 42.

Ellison encouraged anyone looking to get involved with their local volunteer fire department to reach out to someone affiliated with that department to help answer any questions they may have.

The Union Grove Facebook page can be found by typing “uniongrovefiredept” in the search box.

He has been the chief at Union Grove for the past 11 years after taking over for his grandfather Charles Culp, who died in 2009.

“I’m sure he (grandfather) would be pretty proud of the strides that Union Grove continues to make,” Ellison said.