The YMCA of Chilton County hosted its annual youth soccer camp, which has become a summer tradition in recent years.

Youth from around the area attend the camp and have received teaching by coaches from various countries through the YMCA’s partnership with U.K. International Soccer.

“We deliver summer camps all over the nation and go around week to week at different locations,” Maredi said.

The camp included children 4 years old to 14 years old and consisted of two daily sessions from June 15-19, with the younger players in the morning session and the older players taking part in the afternoon session.

According to Maredi, the range of ages means a variety of skill levels with some having played for years mixed with others who were being introduced to soccer for the first time.

“The most rewarding thing is having kids that haven’t played before,” Maredi said. “The first day they are very nervous, but by the last day they love it and are giving you hugs and crying because they don’t want to go home.”

Setting different goals for different players is key to making sure each player gets the most they can from the camp. 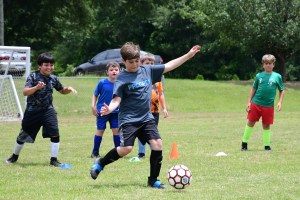 Skills were taught to an array of age groups during the weeklong soccer camp. (Photo by Anthony Richards)

“I’ve got 4-year-olds that have never played before, so for them it’s about teaching how to kick a ball without falling over,” Meechan said.

The week was broken down with each day focusing on various topics of the game.

“It’s about seeing how the kids react to certain drills and activities and the social aspect of it,” Maredi said. “You just take it from there.”

The camp was the first time Maredi had the opportunity to visit Alabama and the southern United States in general.

“I’ve noticed that for some kids their number one sport is probably something else like football, but they’re very open-minded to it and are willing to learn and ask questions,” Maredi said. “It’s great fun in that sense.”

The international flavor of the camp is evident, which allows for the children involved to get both a soccer and cultural experience.

“French fries here are called chips in England,” Meechan said. “The kids just find that mind-blowing that things are called something different in another country.”

One thing in particular stood out to Meechan right away.

“The southern kids are the politest kids out of everywhere I’ve been in America,” Meechan said. “It’s all lot of ma’am and sir and offering to help pick up the cones [after practice].”

According to Meechan, the vibe for soccer in America is definitely continuing to grow.

“I was here last year when the women won the world cup, and that gave a really good buzz around the country,” Meechan said.

Another aspect that is helping develop soccer fans in America is the increasing media coverage of both domestic and international games.

“It’s more accessible,” Meechan explained. “You guys get more coverage of the Premier League [the top soccer clubs in Great Britain] on your TV than we do in England, because they want us in the stands. It’s a sport that everybody can play, because it’s very cheap. You only need a pair of tennis shoes and soccer ball, and you’re good to go.”

Unemployment rate drops in May

By JOYANNA LOVE/ Managing Editor The unemployment rate for Chiton County dropped to 9% in May a decrease from 12.2%... read more