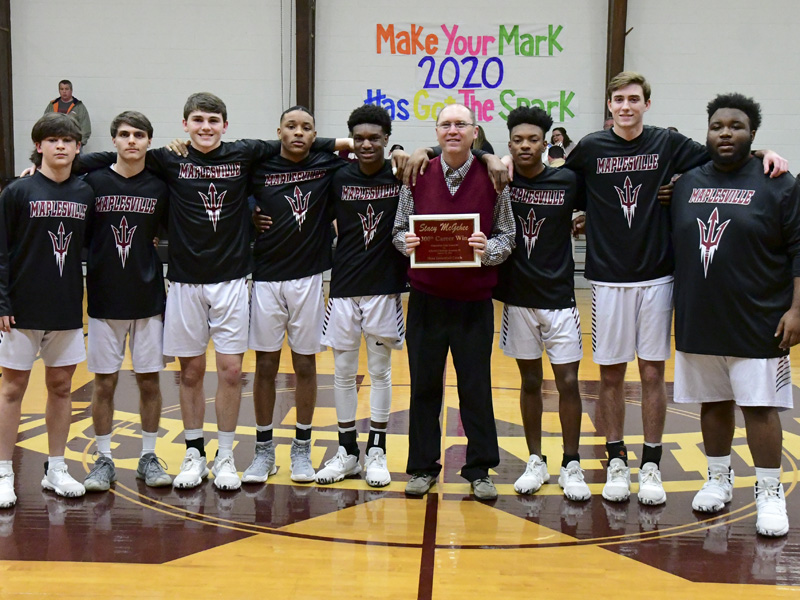 Maplesville head coach Stacy McGehee is surrounded by his players after receiving a plaque in recognition of his recent 300th career victory prior to the regular season finale on Jan. 31. (Photo by Anthony Richards)

Stacy McGehee recently earned his 300th victory as a varsity boys basketball head coach and was recognized for his achievement prior to Maplesville’s final home game of the season on Jan. 31.

Reaching 300 wins usually means coaching for a lengthy period of time, which McGehee has done as he is about to complete his 22nd season coaching boys basketball.

He recently adjusted the way he views the milestone mark after hearing of the news of former NBA star Kobe Bryant’s sudden death in a helicopter crash on Jan. 26.

“I knew I was getting close and I was really thinking about the 300 wins, but it hit me in the car after Kobe’s death that it is a great achievement here on earth, but being a Christian and trying to live a Godly life is more important,” McGehee said. “God’s not going to ask me how many wins I have, he’s going to ask me how much fruit did I produce.”

Although the achievement highlights winning, he hopes to leave a lasting influence beyond just what the scoreboard reads. 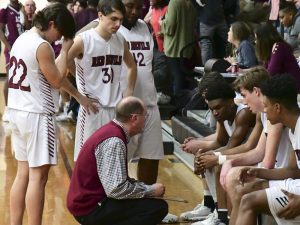 “Kobe’s death and hearing all the things said about him made me think and really put into perspective what I want to be remembered for,” McGehee said.

The weeks leading up to his 300th victory and since he has received several Facebook messages from former players congratulated him on the accomplishment.

According to McGehee, it was nice to look back and reminisce about the times he spent with each of those players.

“I’ve had some special teams, and some that I’ve really had to coach,” McGehee chuckled. “It’s been a ride.”

Another special aspect surrounding his 300th win was that it came against Jefferson Christian Academy, where he once coached.

McGehee has coached multiple teams during his career, including Jemison and currently Maplesville within the county limits.

He shared a story about recently meeting one of his former players, who had dealt with some health issues, but was feeling better and had a job and had been baptized.

“The biggest thing I heard was that he was baptized and was following Christ,” McGehee said. “That was what made my night.”