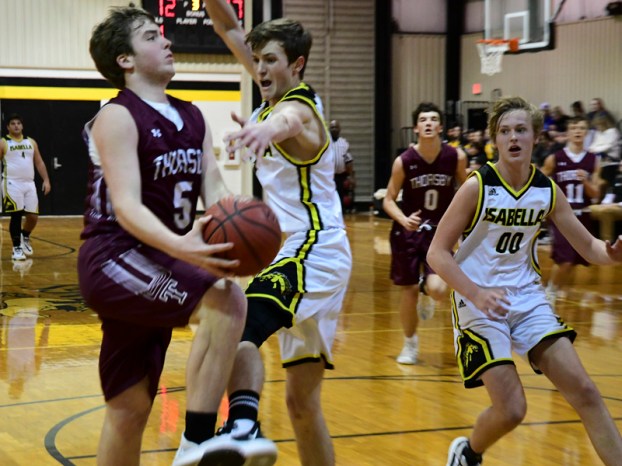 Thorsby’s Koby Davis slices to the basket against Dallas Murray and Logan Murray (No. 00). (Photo by Anthony Richards)

Of the scorers, it was senior Tucker “Dale” Patterson who led the efforts with a game-high 12 points, nine of which came from long range.

“Today was all about focusing on the little things,” Patterson said. “It was good to get back in a rhythm.”

The Rebels connected on four 3-pointers during an explosive 26-point first quarter.

Thorsby drained eight 3-pointers on the night, including a pair from senior point guard Tyler Ray.

“When everybody starts pushing it [offensively], everyone’s going to have a chance for points and the score is just going to keep going up,” Patterson said. “We were all just clicking.” 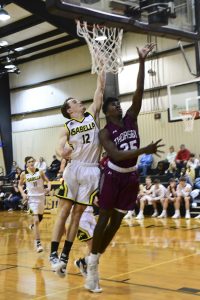 Meanwhile, the Thorsby defense was able to lock things down from the opening tip and made life difficult for the Mustangs, to the tune of allowing just five points in the opening quarter and 12 in the first half.

One of the bright spots for Isabella was the defensive play of Kendall Reeves, who had multiple blocks during the game, which showcased his leaping ability.

Thorsby now shifts its focus to wrapping up region play with a win at home against Reeltown on Jan. 24.

According to Patterson, not taking quick shots, boxing out and cutting down on the turnovers will be important factors for THS to achieve victory.

Due to the lopsided score, both teams dove into their bench and played several that usually do not see as much playing time as the regular rotation.

“It just gets them more of that valuable experience,” Patterson said.

The Thorsby Rebels boys basketball team finds itself in a tussle with Coosa-Central for the top spot in the regular... read more