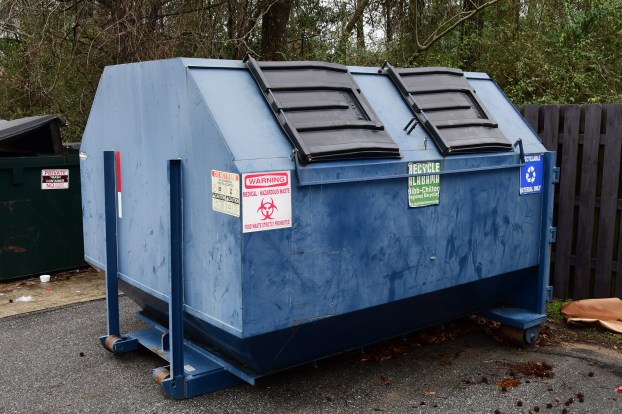 These blue bins will soon be rounded up for storage in Chilton County, as the recycling program has been suspended. (J.R. TIDWELL/ADVERTISER)

This is the story of how a single rogue deer managed to end recycling programs in two separate Alabama counties.

In the fall of 2013, Bibb and Chilton counties partnered with Bibb Correctional Facility in order to create a recycling project between the two areas.

“Bibb County wanted to start the program but needed a partner,” West said. “They wanted to help alleviate trash and to collect recyclable materials.”

A grant was obtained to purchase a truck, trailer and the bins necessary to carry out the project.

The bins were placed in Bibb and Chilton, and a driver would take the truck and trailer around to collect the receptacles on a regular basis in order to empty them out.

The collected trash was then taken to Bibb Correctional Facility in Brent to be sorted by inmates and the recyclables later sold.

For around six years, things like plastic containers, aluminum cans, newspapers, shredded paper and paperback books were accepted and placed in blue containers scattered around Chilton County for pickup.

However, the driver involved with the project struck a deer while on duty, and the truck used for the recycling program was wrecked.

Since grant money was used to obtain the truck, there was no set-aside local funding to replace the vehicle.

This meant that the counties would have to use other funds to continue the project if they so chose.

According to West, the Bibb County Commission tabled the issue at its latest meeting.

The Chilton County Commission ultimately voted to suspend the program at its meeting Jan. 14. However, if Bibb County decides to resume the program in the future with some other funding, Chilton County will have the option to rejoin.

Chilton County Commissioner Allen Caton said the county will pick up the blue bins scattered throughout Chilton and take them for storage.

Chilton County had previously roped off several of the bins. Since no one was emptying them, trash was piling up around them.

“We don’t have the means to do anything with them,” he said beyond collecting them.

The program was hindered by the amount of non-recyclable trash that citizens placed in the bins, and the two counties ultimately decided the program was not financially beneficial.

Caton said Bibb and Chilton covered all the expense of the program (after what the original grant paid for) and received none of the funds gained by selling the sorted recycling, as Bibb Correctional Facility kept that money.

— Anthony Richards contributed to this article.

Three storm shelters are in the process of being completed soon. Union Grove No. 2, Gap of the Mountain No.... read more