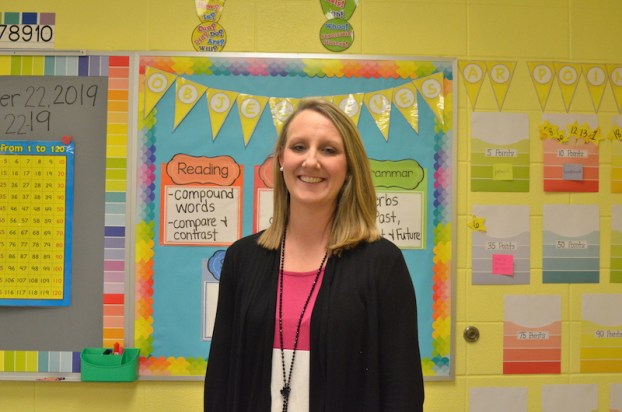 Holly Payne received a cochlear implant which has improved her hearing and greatly helped her in the classroom. (JOYANNA LOVE/ ADVERTISER)

It had gotten the point she was asking soft spoken students to repeat themselves multiple times and relying on lip reading more and more.

When she did not hear a new quieter tone used for a fire drill, second-grade teacher Holly Payne at Maplesville High School knew she needed a better solution to her hearing loss, or she would have to leave teaching.

“They had made an announcement that morning saying we were going to have a fire drill, and there were bits and pieces of announcements that I would miss … I missed that part … they had a new tone, and it beeped real quietly over the intercom and so that tone was in the range of sound that I couldn’t hear at all.”

Since the tone was new, students were not sure what it was.

“I was really embarrassed and really upset,” Payne said.

Payne’s hearing loss began when she was 18 years old.

“It was subtle in the beginning,” Payne said. “I didn’t really realize it. It was mild. They thought it wouldn’t get worse, but it did.”

In 2007, she graduated from college and started her teaching career. The following year, hearing her students became difficult.

Her hearing continued to get worse and additional symptoms, including dizziness, prompted a specialist to suggest she had Meniere’s disease. She began treatment, but her hearing loss was already in the moderate to severe range.

“I got my hearing aid upgraded to the top of the line,” Payne said.

She could even control the volume with her smartphone.

“In the beginning, that helped a lot …then I realized even though I could hear sound, I couldn’t understand speech,” Payne said.

After the fire drill incident, Payne talked to an ear, nose and throat doctor about the possibility of receiving a cochlear implant.

“At first, they didn’t think I was going to be a good candidate,” Payne said.

Initially, Payne scored too high on the hearing test to be considered. A voice would state a word or phrase, and Payne had to repeat the word.

“I was really disappointed because I thought that was going to be my saving grace if I could get that,” Payne said.

“I could tell I was doing horrible, and when they were done, they said I only have 20% of understanding in my right ear,” Payne said.

In May, she had her surgery for the implant. A cochlear implant uses a microphone, speed processor, transmitter and electrode to help a person hear electronically, according to the National Institute on Deafness and Other Communication Disorders. A magnet under the skin on Payne’s head keeps the exterior portion of the device connected but also allows for it to be removed.

“My little boy’s voice sounded like Mickey Mouse,” Payne said. “… Your brain literally has to retrain itself to hear that way.”

She said reading out loud and watching TV with the captions on helped.

When she went back to teaching in August, she was hearing really well.

There are still occasional times she has difficulty understanding a soft spoken student, but it’s much better.

“I can actually have conversations with my kids now,” Payne said of her quieter students.

Before the surgery, she would have to ask them to repeat themselves multiple times.

“It has literally given me my life back,” Payne said.

Payne said she had stopped talking for the most part in social situations because she could not hear.

Payne is in her first year teaching at Maplesville. Prior to that, she taught at Jemison Elementary School for 12 years.

His Steps for Women helps in recovery

By JOYANNA LOVE/ Senior Staff Writer The Clanton Kiwanis Club received an update from His Steps for Women, a recovery... read more