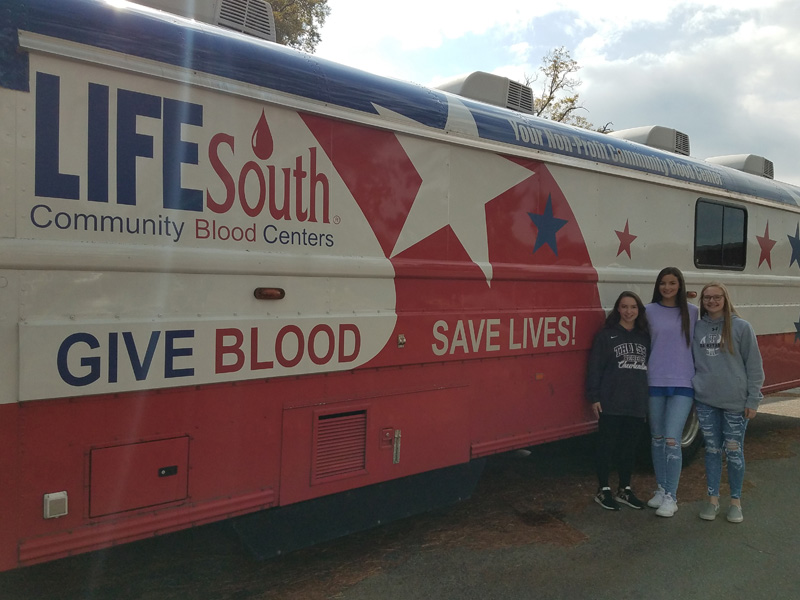 November has and will continue to be a jam-packed month for the Thorsby Beta Club.

The club partnered with LifeSouth Community Blood Centers to host a blood drive on Nov. 7 and is also holding a pet supplies donation drive throughout the month.

“It’s not just an academic club, but also allows us to give back to our community,” Beta Club officer Lindsey Wood said. “These two projects really show that our students care about others and are dedicated to Beta Club.”

According to Beta Club sponsor Kim Martin, seniors that have given at least four times while in school will be awarded with a cord to wear on their gown during graduation.

“Usually people are skeptical at first, but after the first time they do it [give blood] they keep on doing it,” Beta Club officer Emily Jones said.

The pet supplies gathered will be donated to the Chilton County Humane Society.

Both are annual initiatives for the Thorsby Beta Club each November and show that whether it is humans or animals there are needs across a wide spectrum.

According to Martin, nearly a pickup truck full of pet supplies was collected during last year’s donation drive.

“The Beta Club’s motto is ‘lead by serving others,’ so it’s good to give back and help where we can,” Beta Club officer Carlee Wyatt said.

Anyone wanting to donate items for the pet supplies drive can drop them off in the designated boxes located at the school office or in front of Martin’s classroom.

Cat food, dog food, cleaning supplies, cat litter, old towels and blankets are just some of the items the Humane Society is in need of prior to the cold temperatures of the coming winter months.

Kitten and puppy food are especially needed. Monetary donations are also being accepted.

The Beta Club hosts a blood drive twice a year. Other initiatives planned for this year include a clothes donation for a local homeless shelter after Christmas and something to give back to the county’s children in the spring.

“The Junior Beta Club will see us doing these fundraisers, so that when they get older they will hopefully want to do that to,” Jones said.

Last year, the club held a drive for bottled water and non-perishable foods and donated the supplies to hurricane victims.

“It shows that every single person matters,” Wyatt said. “You might not even be part of the club, but you still want to find a way to get involved. Every donation makes a difference.”