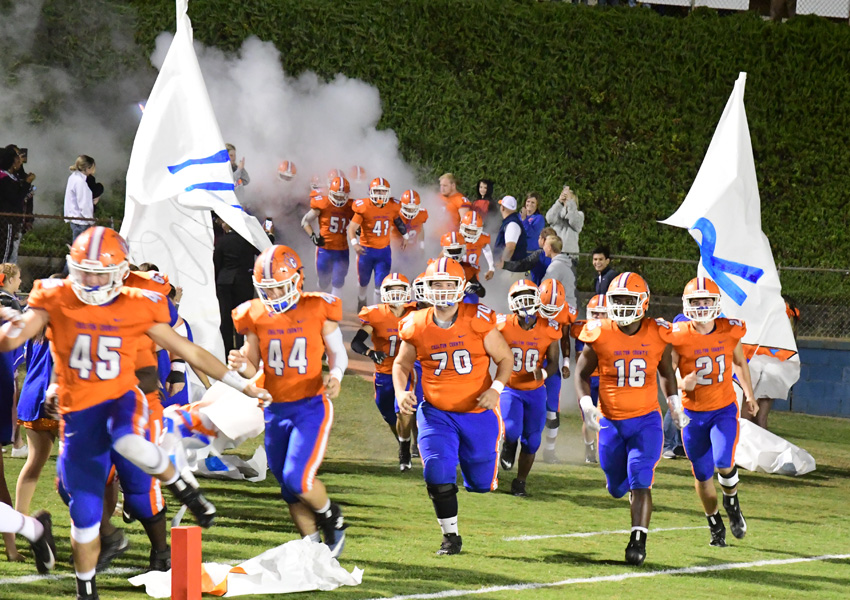 CCHS will now host its first-round playoff matchup after pulling off a massive 14-13 victory on the road against Demopolis on Oct. 25. (Photo by J.R. Tidwell)

Senior night next Friday will not be the last home game the Chilton County Tigers play this football season.

The Tigers made sure of that following a 14-13 program-building win on the road against Demopolis on Oct. 25 that undoubtedly sent shockwaves echoing throughout the state.

“As long as you get your foot in the door [of the playoffs], anything can happen,” CCHS head coach Tal Morrison said. “It’s a big deal to our players, our fans and our city.”

With the win, CCHS finished runner-up in Region 3-5A.

As runner-up, the Tigers will now host its first-round playoff matchup against Briarwood, Ramsey or Pleasant Grove.

Both teams traded touchdowns early on in the contest, but CCHS missed its extra point attempt and trailed 7-6.

Two possessions later, the Tigers took over near midfield with seven minutes to go before halftime.

However, the game was put on hold for another reason instead due to a tornado warning, which popped up while the Tigers were driving and at the Demopolis 16-yard line.

“It [the weather] hampered both teams a good bit,” Morrison said. “I’m really proud of our boys for overcoming the adversity.”

According to Morrison, the Tigers came back from the delay and scored. Shi Keem Laister connected with JaKobi Albert for a two-point conversion to give CCHS a 14-7 lead at halftime.

Demopolis put together a touchdown drive of their own in the fourth quarter, but an unsuccessful two-point conversion wound up being the difference in the game.

The defense also came up with goal line stop in the third quarter to help preserve the lead at the time.