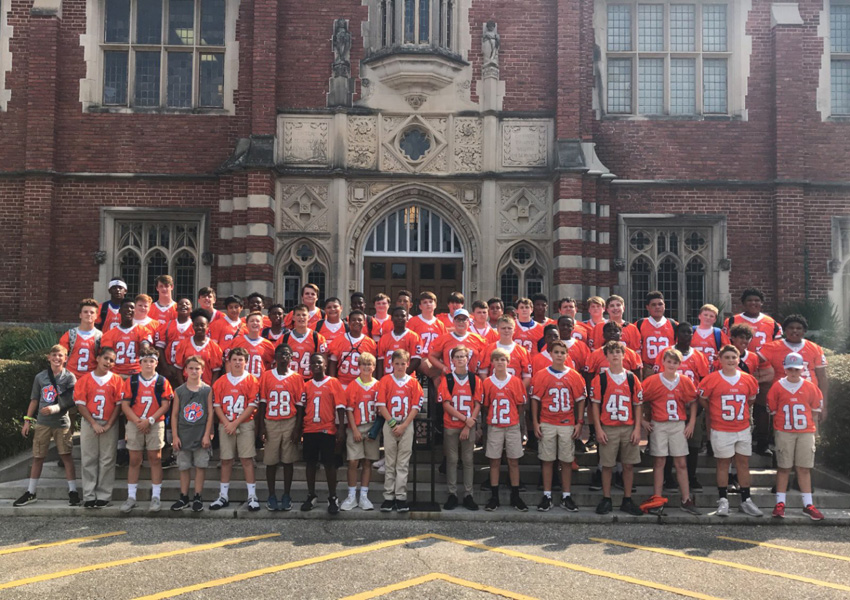 Clanton Middle School’s football team experienced what college life would be like. The group toured the campus and watched a football practice. (Contributed photo)

The Clanton Middle School football team got a unique opportunity to visit Huntingdon College in Montgomery on Oct. 2.

The visit included touring the campus and watching the Huntingdon football team practice.

“I enjoy doing things like this to help get them around these upper-level programs,” CMS head coach Thomas Hughes said. “I know we put [college athletes] on a pedestal at times, but this allows them to see that they’re real people.”

Hughes graduated from Huntingdon and thought that it would be a fun thing to do during an off week.

“I thought about my connections with [head football] coach [Mike] Turk at Huntingdon and gave him a call,” Hughes said. “From there, everything just fell into place.”

About three years ago Hughes had taken the middle school boys and girls basketball teams on a similar trip.

“Seeing a middle school go to a college is different, but it is an experience for them to go and just see what college life is like,” Hughes said. “Something I want them to see is that this is a possibility. It’s four more years of playing, and you get an education. It’s a 40-year plan, not a four-year plan.”

According to CMS player Hunter Ousley, one of the most interesting things was seeing how a college program is run compared to how they approach things at the middle school level.

Ousley primarily plays H-back and inside linebacker. Because of that, he found himself spending a lot of time paying close attention to how the Huntingdon players approached playing those certain positions.

“Picking up on the little things that they do definitely helps,” Ousley said.

According to Ousley, while on the campus tour he enjoyed the amount of open areas around campus where students could mingle or just choose to relax.

A positive that Hughes saw was that some of his players noticed and were quick to point out some of the same drills they do at CMS on a daily basis.

“I always try to get my teams to understand that there is a certain level of focus that have to have during practice to prepare for the game that week,” Hughes said. “There was a purpose behind every drill, and they were hustling from point A to point B.”

The fact that they were realized what drills they were doing signifies how aware the CMS players were of what was going on around them. For Hughes, that clarified it was a successful trip.

“I hope that they saw that even players at that level are working on their skill and striving to get better each and every day,” Hughes said.