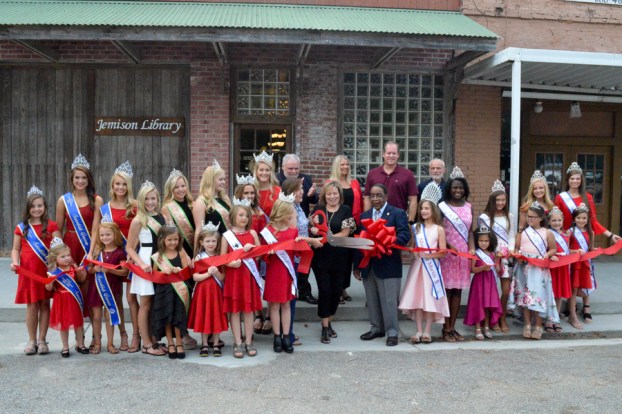 A ribbon cutting was held as part of the Jemison Library’s grand opening ceremony on Oct. 6. The new location is 160 Main St. (Photo by Anthony Richards)

The Jemison Library held its grand opening event on Oct. 6, which christened the library at its new location at 160 Main St.

The highlight of the event was a ribbon-cutting ceremony that included an array of pageant queens as well as volunteers and influential people that had a hand in helping during the moving process.

“The sacrifice and the endurance that God has given to them has been out of sight,” Jemison Mayor Eddie Reed said. “I’ve never seen such a dedicated group of people. I just love it.”

It has been about a year since the building was purchased and the move from its former locale at the Jemison Municipal Complex officially began.

“We finally get to the business of serving the community,” librarian Cheryl English said. “We will have so much to offer, and we’re so excited about that.” 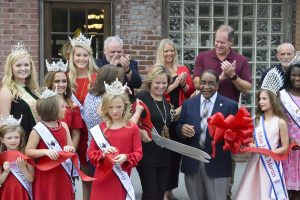 Tammie McGriff and company were all smiles after she did the honor of cutting the ribbon. (Photo by Anthony Richards)

One of the advantages the new location will provide is additional programs hosted by the library.

According to English, a planned benefit of the move is to help in the revitalization of the “old town” section of Jemison.

The library’s new location also holds a historic significance in that it was Jemison’s first city hall.

“It all has a little story behind it,” McGriff said.

Future plans include working in conjunction with Old Town Eatery and the Jemison Fire Department, both of which are also located on Main Street.

“It’s a good location, and we’ll all get to work together,” English said. “We’re so blessed.”

One of the first events planned will be a Halloween celebration expected to be held on the street as part of the holiday festivities.

By JOYANNA LOVE/ Senior Staff Writer Central Alabama Horse Club’s first Mule and Farm Day had something for everyone on... read more