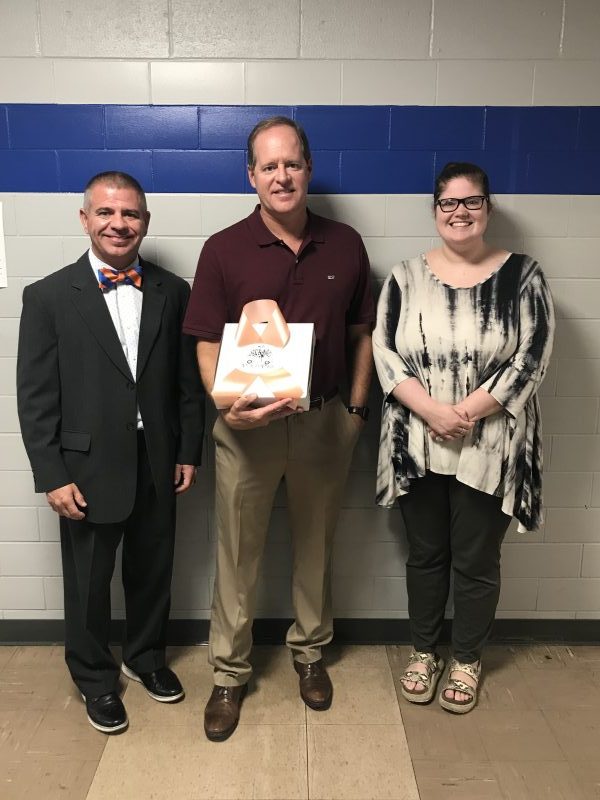 Chilton County High School Principal Ron Pinson with Sen. Cam Ward, holding his thank you gift from the school, with teacher Mary Owen-Harrison after presenting a check to the school. (Contributed)

An initiative at Chilton County High School to enhance teaching and create a classroom setup more conducive to discussion and group work got a helping hand recently from Sen. Cam Ward.

Senator Cam Ward presented $2,500 to the school for tables and chairs on Sept. 25.

“We are trying to get away from the traditional desks, and create unique educational environments for the kids,” CCHS Principal Ron Pinson said.

Senators have a fund that they can use as they choose to make donations to schools requesting funds.

“He has been very good about donating to us over the past two or three year, especially,” Pinson said. “He has given us several thousands of dollars … Everything he has given us we have used in the classroom.”

He said the school was very thankful for the funding.

The furniture will be used in Mary Owen-Harrison’s English class.

“Traditional desks create an environment of formality … if you want to do activities, you’ve got to move your desk and it makes it inconvenient,” Pinson said.

Having the tables instead makes it more convenient for students to work together on projects and have discussion.

“Kids love it,” Pinson said. “… Today’s kids learn differently than years ago, and we have got to work much harder to keep their attention, to make education more fun. We have to make it relate to the students in today’s environment and this is one way to do that.”

Pinson said there are seven or eight classrooms that have switched to tables, including some for English, math and science.

CCHS has a grant committee that had initially contacted Ward about awarding funds for the project.