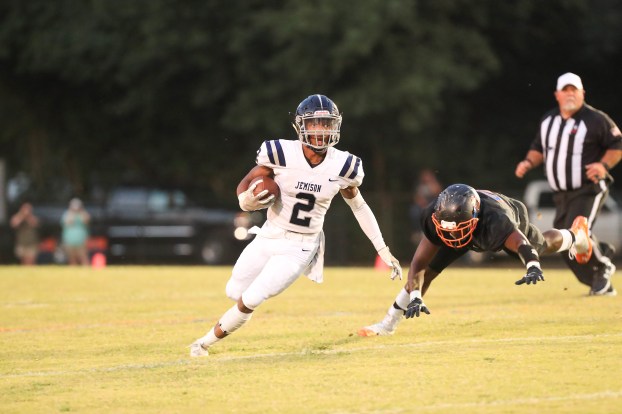 Jemison’s Joshua Gilliland evades a Montevallo defender during a region game on Sept. 12. The Panthers lost 68-40. (Photo by Alec Etheredge/Special)

Montevallo (3-1) was able to put up 30 first-half points on just 14 plays and less than eight minutes of possession time thanks to six plays of 20-plus yards, then went on to score five more times in the second half with four of those drives coming in three plays or less and one in five plays.

“We had a couple guys injured tonight,” Montevallo head coach Brandon Wilcox said. “Whenever that happens, we always talk about guys having to step up, and I saw some guys step up tonight that haven’t had big roles this year. Joesph Anderson and Kial Cottingham both had huge nights, and at times, I saw some good things out of our defense.”

One of those guys out with an injury was leading receiver and Auburn commit J.J. Evans, but with the emergence of Anderson, Kam’Ron Goins and Cottingham, as well as receiver Jamarius Carter coming off a 179-yard, three-touchdown performance, Montevallo’s offense didn’t skip a beat.

While Deon Gilliland flashed his brilliance with an early 45-yard touchdown catch on a screen pass, Anderson, a sophomore running back, helped take pressure off Gilliland with 13 carries for 132 yards and two touchdowns.

Quarterback Malik Inabinette finished his night commanding the offense 15-of-18 for 366 yards and five touchdowns.

“Our guys are doing a good job of executing and exploding when they find an opening,” Wilcox said of the offenses explosive plays. “Offensively, any time you score 68 points, you can’t be too upset.”

That offensive power started right out of the gates for the Bulldogs.

After a strong defensive stop to open the game, Montevallo started the fireworks on offense with a strong first drive of the game that saw Goins reel in a 35-yard catch, followed one play later by a 45-yard touchdown catch on a screen pass to running back Gilliland to put the Bulldogs on top 8-0 following a 2-point conversion with 6:30 to play in the opening quarter.

Montevallo’s defense then stepped up again and forced another three-and-out, which brought a confident offense right back on the field.

Three plays into the drive, quarterback Inabinette took the snap and heaved the ball down the visitor’s sideline. He targeted receiver Carter, who leapt up in man coverage and hauled in the catch, before then throwing the defender off of him before rumbling the rest of the way into the end zone for a 43-yard touchdown catch. 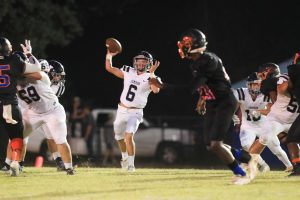 Following a 2-point conversion from Gilliland, the Bulldogs took a 16-0 lead with 5:10 left in the first quarter.

Jemison finally answered for the first time in the game with a lengthy drive to start the second quarter, which was capped off by a 6-yard touchdown run from Josh Gilliland. Following a successful 2-point conversion, the Panthers had drawn to within eight points at 16-8 with 6:25 remaining in the half.

It looked as if Montevallo was set to extend its lead on the ensuing drive thanks to a long drive that saw the Bulldogs eventually gain first-and-goal after a 21-yard run from Deon Gilliland, but one play later he fumbled and gave the ball back to the Panthers.

One play into the drive, Jemison took an 89-yard run up the Montevallo sideline to set up first-and-goal before scoring three plays later. The Panthers went on to miss their PAT attempt shortly after due to penalties pushing them back, which kept Montevallo in front 16-14 with 1:48 left in the half.

Jemison had scored 14-unanswered, but the Bulldogs’ explosive offense wasn’t going to be quiet for long and answered in a hurry thanks to another quick two-play drive.

Anderson started the drive with a 22-yard run, before Inabinette hit Goins for a 47-yard touchdown pass to put Montevallo on top 22-14 with 1:02 left in the half.

On the ensuing drive, Montevallo got another good break when Jemison’s quarterback rolled out and threw a wobbly pass over the head of his intended receiver and into the hands of Jamion Mack-Prentice.

With 41 seconds left and on the Jemison 35-yard line, Montevallo put together a 15-yard run and 5-yard run from Anderson, followed by a 13-yard touchdown run from Inabinette to take a 30-14 lead with 14 unanswered points of its own heading into the half.

Interesting enough, the Bulldogs came out and went three-and-out to start the second half, while Jemison came out and scored on a 13-play drive that took up 5:19 of the third quarter.

But Montevallo’s offense wasn’t stopped the rest of the night.

The Bulldogs went on to score in one play on the ensuing drive following a 60-yard kickoff return and a 16-yard touchdown run both from Anderson.

Jemison then scored its second touchdown in as many drives to start the second half, but failed on the 2-point conversion attempt, which kept the Bulldogs in front by 10 at 38-28.

Jemison went on to score two more touchdowns, while Montevallo added another two-play drive for a touchdown behind a 40-yard touchdown run from Anderson to complete the 68-40 final score.

MHS shuts out A.L. Johnson The Maplesville Red Devils made life look easy during a 68-0 victory on the road... read more