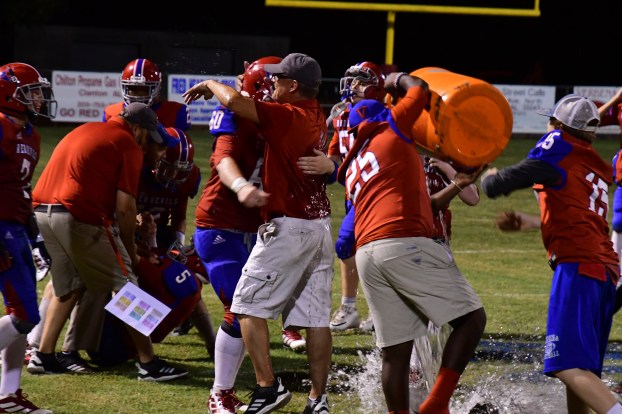 Fans of Verbena football have to look back to Oct. 28, 2016, to find the last time the Red Devils tasted victory on the gridiron, a 53-28 rout of Berry.

Or at least, that held true until Sept. 6, when VHS snapped a multi-year losing streak with a 22-8 victory over Ellwood Christian in the second week of the 2019 season.

“It feels amazing,” said first-year head coach Josh Robinson. “I’m proud of our guys. They have come out here since June and worked their butts off. We started out with 12, and we are dressing 23 on Friday nights now. These guys come out here every single day and they work hard. It’s about them. It’s about the players and this community. You look up here and see how excited everyone is. That’s what it’s all about.”

Taylor Rutland, the only four-year senior on the VHS squad, echoed Robinson’s sentiment.

“It’s been rough,” he said. “We have been trying to recruit players since I was a freshman. It feels pretty good to get a win. We haven’t won since ninth grade.”

Things seemed to be going well for the Red Devils early on. Verbena managed to take the ball deep inside Eagles territory after earning possession on a Jason Barber interception.

However, a fumble at the 3-yard line led to a devastating 97-yard fumble recovery and score by Ellwood Christian.

Two big runs by Verbena freshman Nathaniel Morris once again got the Red Devils moving on offense near the end of the first quarter, but an interception in the end zone by the Eagles killed another drive.

Verbena found some luck at last the next play, as the Red Devils recovered an Ellwood fumble at the Eagles’ 6-yard line.

A play later Morris crossed the goal line twice, once for a touchdown and again on the conversion, to knot the game at 8-8.

Ellwood Christian capped a drive with an 11-yard touchdown pass, or so it seemed. The score was negated by an illegal man downfield penalty, and the Red Devils would force a turnover on downs midway through the second quarter.

Another VHS drive ended in an interception near midfield, and neither team would up its score before halftime.

Just over three minutes into the third quarter Jarod Quinn punched in a short touchdown run to cap a drive and give Verbena a 14-8 lead.

Quinn connected with Morris on a pass a few minutes later, and the freshman bobbed and weaved through defenders before finally notching a 74-yard touchdown to extend the Red Devils’ lead to 22-8 after Quinn picked up the conversion.

Ellwood made another foray into Verbena territory midway through the fourth quarter, but an interception by D.J. Jackson sealed the action for the night.

The Red Devils are now 1-1 on the young season and will begin region play Sept. 13 by hosting Billingsley.

“We have an extremely difficult schedule ahead, Robinson said. “We have Billingsley, Wadley and Highland Home coming up. They are all good, physical football teams. But we are going to enjoy this (win) for this weekend, I promise you that.”

This weekend marks the first full weekend of the year. I know there has been football played both on TV... read more