Nationals up next for Thorsby FFA 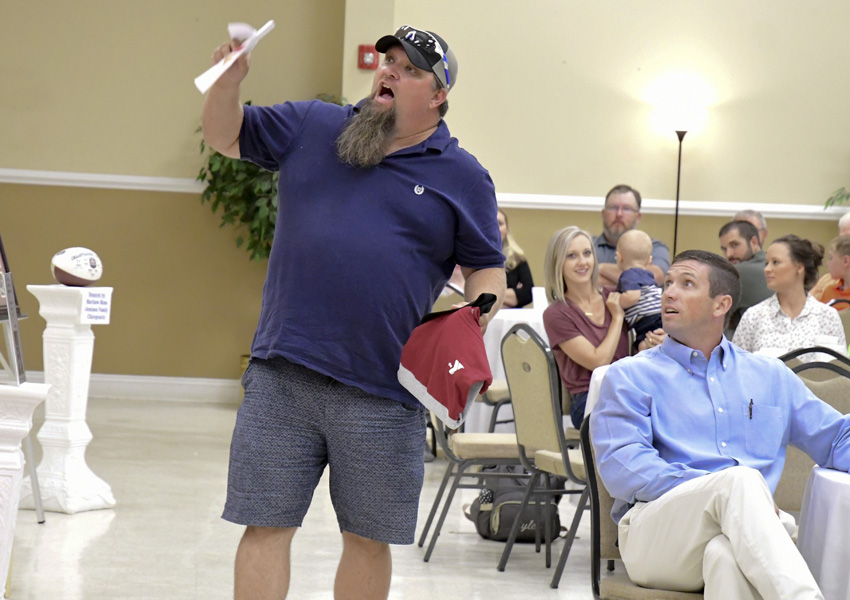 A live auction was part of a fundraising event hosted by Thorsby FFA to raise money for their trip to nationals in October. (Photo by Anthony Richards)

A packed house was on hand at the Jemison Municipal Complex for the Thorsby FFA’s auction and steak dinner event.

The fundraiser has become an annual event this time of year, as this will be the sixth straight year Thorsby FFA has sent a team to compete at nationals in Indianapolis.

This year Thorsby will be looking to bring home a pair of team national titles, as well as an individual honor.

Rylie Scarbrough is part of the all-female poultry evaluation team that will be competing at nationals.

One of the toughest parts about the run of success that Thorsby has been on over the past six years is maintaining it, which means being able to fight off any complacency that may creep in.

“We’ve gotten to the point where we expect it from ourselves, but Mr. Lucas always reminds us that you can’t get something without working for it,” Scarbrough said. “I feel like I’ve been humbled a lot since joining FFA. It’s not just all winning or losing, it’s a mixture of both.”

Scarbrough has competed in meat evaluation and environmental science in previous years.

“He gets us to try to do different things,” Scarbrough said.

A perfect example of that is the poultry team that Scarbrough currently finds herself on.

“I was scared of chickens when he first asked me to do it,” Scarbrough said. “I’m not anymore, because of him helping me own that fear. He definitely tries to get us to jump out of our comfort zones.” 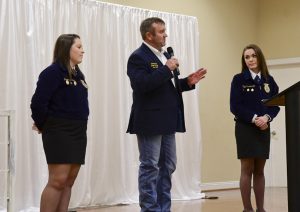 Thorsby agriculture teacher Brian Lucas speaks to the crowd about his enjoyment of teaching his students. (Photo by Anthony Richards)

According to Scarbrough, at the start of the last school year she would have never thought that she, of all people, would be competing on a national scale with anything to do with chickens.

“I still hate being around chickens, but I do know a lot about them,” Scarbrough chuckled.

Having been through the pressure cooker that is FFA nationals in prior years is something Scarbrough believes will help this time around.

“It’s something that you go into [the first time] not really knowing what to expect,” Scarbrough said. “Either way, it really is a great experience, and you leave knowing more than you did going in.”

One of the interesting things Scarbrough recalls from her past trips to nationals is the group eating at Steak n’ Shake each year.

According to Scarbrough, she enjoys the bonding that takes place during those meals.

Just like Scarbrough, Brooke Lewellen will be competing in her third nationals, this time on the meat judging team. Livestock evaluation, horse evaluation and environmental science are some of the other fields she has taken part in over the years.

“I had heard that in meat judging you would have to stand in a freezer, which was very intimidating, but getting into it has been really good,” Lewellen said.

Thorsby’s track record of success in the meat judging category, having won state the past handful of years led to an extra sense of pressure for Lewellen and her teammates.

However, it was something the group embraced, and they were able to add to the reign of success.

According to Lewellen, seeing the number of people that came out to support their accomplishments and acknowledge the hard work that went into it means a lot.

“It feels really good to know that we have a lot of good people supporting us,” Lewellen said.

Lewellen remembers how the seniors at the time got her interested in FFA and, although just a junior, she looks to have that same influence on the younger students.

“Those seniors invested in me, and now I’m getting the chance to do the same,” Lewellen said.

With the willingness to pass along such passion to the next wave of students, it is easy to see how Thorsby FFA finds its continued success.