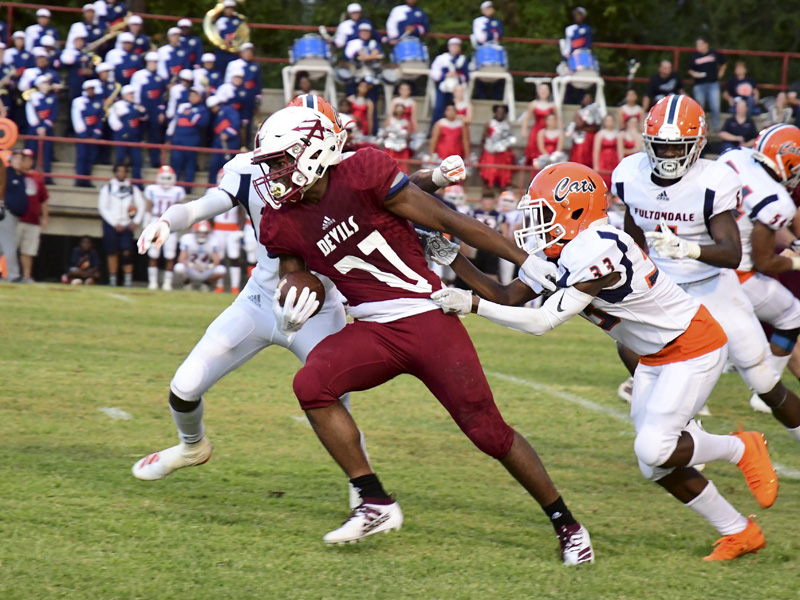 Ryan Morrow drags a Fultondale defender in a game on Aug. 23. (Photo by Anthony Richards)

Maplesville opened up the new era with Brad Abbott as head coach with a commanding 40-6 victory over Fultondale on Aug. 23.

Ryan Morrow led the high-scoring effort for the Red Devils with 283 total yards and four touchdowns.

Of Morrow’s yardage, 260 of that came on 17 carries, as well as three of his four touchdowns on the night.

He showcased both his power and speed by scoring runs of 1, 62, and 91 yards respectively.

Jackson Abbott also had a productive night passing the ball. He completed four of 11 pass attempts and connected on a pair of touchdowns in the game to Kalyn Hardy and Morrow. 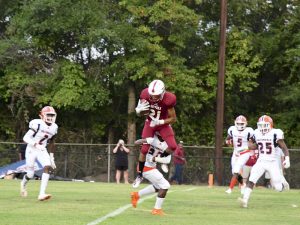 Kalyn Hardy leaps to haul in a Maplesville touchdown. (Photo by Anthony Richards)

The first touchdown of the game was a 10-yard slant from Abbott to Hardy, who did an excellent job of boxing out the defender and leaped into the air for a highlight reel catch at the goal line.

Latrell Wilson capped the night by punching in a touchdown from a yard out.

The Red Devils kept the Fultondale defense off balanced all game and outgained them by 260 yards.

On defense, Maplesville was able to get continual pressure, which resulted in six different players finishing with a tackle for a loss.

Noah Walls and Latrell Wilson each had a sack, while Wilson also picked off an early deep shot down the field by Fultondale.

The game was officially called due to lightning with eight minutes left to play in the fourth quarter.