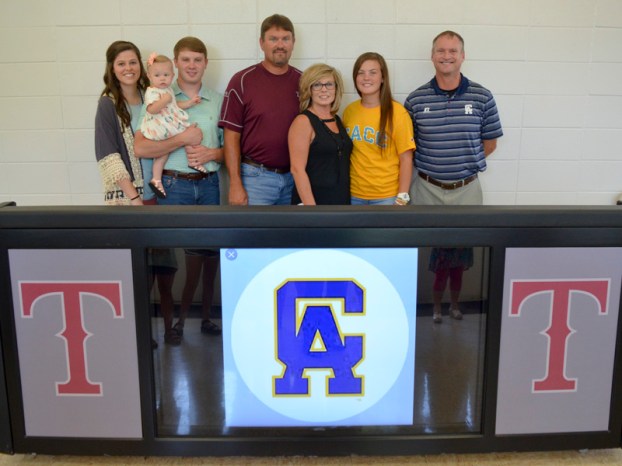 Hannah Smith of Thorsby signed to play softball at Central Alabama Community College during a ceremony on July 10. (Photo by Anthony Richards)

Hannah Smith of Thorsby always knew that softball could provide an opportunity to play at the college level.

That belief became a reality after she officially signed to play softball at Central Alabama Community College in Alexander City.

“I love basketball, but softball was something I knew could take me somewhere,” Smith said. “I have just always felt more comfortable with myself in softball.”

That comfort level comes from having played the game for almost her entire life.

Smith started playing tee ball when she was 4 years old, and her first competitive softball came about two years later.

“She can do three or four different things really well,” CACC assistant coach Steve Lewis said. “That’s what we look for, an athletic player. She’s a good student, good person and can play softball.”

Part of the process leading up to her signing included taking part in a tryout where the CACC coaching staff put her through hitting and fielding drills.

“I gave it everything I had,” Smith said.

According to Lewis, one of the attributes that won them over was Smith’s versatility to play multiple positions.

“The more versatile you are, the more chance you have to play,” Lewis said. “You don’t always play the position you did in high school.”

There is a certain willingness and open mindset that must be had by a player in order to excel at playing several positions.

“Outfield is where I normally play and it’s my favorite, but if I have to play somewhere else I will and I’ll give it the best I can no matter what,” Lewis said.

Smith graduated from Thorsby in May and has now shifted her focus to starting the next phase of her life and the upcoming softball season.

“It’s just a blessing,” Smith said. “I feel so grateful because I get to keep going.”

Another positive is that CACC is about an hour away, which will allow for family to catch some of her games.

According to Smith, she felt at home as soon as she walked on campus because it was small and had a tight-knit feel similar to what she experienced in high school.

She thanked her parents for the support that they have shown along the way to help get her to this point.

“They’ve done everything they could to help me and get me where I needed to be,” Smith said.

Pico Kohn of Chilton County High School is The Clanton Advertiser’s 2019 Baseball Player of the Year after a season... read more