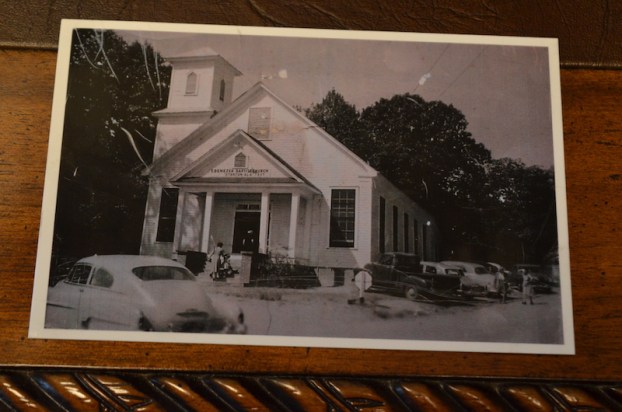 Ebenezer Baptist Church as it looked in the 1940s-1950s before the addition was built. (Contributed)

Ebenezer Baptist Church is celebrating its 200th anniversary with special services throughout July.

The commemoration kicked off on July 7 when some church members came to service dressed in 1800s attire and a special sharing time.

“Gene Carter, Pat Williams, Judy Walls and Jack Jones shared how the leaders in the past years impacted their lives and families through the organizations of Mission Friends (formerly called Sunbeams), Royal Ambassadors, Girls in Action, Bible Study and music,” Sandi Rasberry of Ebenezer Baptist Church said. “Stories were told how the hand of God was upon the church during the good times as well as the bad times. These stories were a reminder of God’s goodness and faithfulness all the time. They helped to remind us of the meaning of the name Ebenezer which is taken from the Bible verse, 1 Samuel 7:12 – ‘Thus far the Lord has helped us.’”

Carter is a “lifetime member of the church,” while Williams, Jones, and Walls are the children of former Ebenezer pastor the Rev. Lloyd Jones, Rasberry said.

Lloyd Jones served as pastor of the church for 17 years.

The church was first established in July 1819, almost five months before Alabama became a state, under the leadership of Isaac Suttle. Plans for this year’s celebration began in 2017.

On July 14, church members are encouraged to wear 1900s attire. At 10:30 a.m., the church will unveil a new historic marker to be placed next to the American Flag on the church property.

The marker will outline a brief history of the church and the “Battle of Ebenezer Church.”

According to the plaque, “The brief but fierce engagement pitted more than 1,500 Confederate cavalrymen under the command of Maj. Gen. Nathan B. Forrest against a larger Union force led by Maj. Gen. James H. Wilson, en route to Selma. Forrest was wounded during the fighting here. Union forces captured 300 Confederates and seized three artillery pieces. The Union dead from the battle were buried in the church cemetery on the hill … The Civil War-era church burned in 1917. A new edifice was built around 1919.”

Also on July 14, “Wayne Arnold, who is a lifelong resident of the Stanton community, will share from his knowledge of historical facts and the history of the Battle of Ebenezer,” Rasberry said. “He will explain the tie between Ebenezer and the Civil War.”

On July 21, Dr. Rick Lance, executive director of the Alabama Baptist State Convention, will be the guest speaker as the church recognizes former Ebenezer pastors Rick Glenn, Scott Watson and Aubry Wallace and their families.

The culmination of the month of celebration will be on July 28.

At 9:30 a.m., Brunch & Browse will feature displays depicting what life was like through the years beginning with 1819 with artifacts including pictures of weddings performed at Ebenezer.

“We are sure a few stories will be heard as people in the community reminisce about how Ebenezer and the Stanton community has impacted their lives ‘then and now,’ Rasberry said.

“Pastor Danny Rasberry, will close with a message on ‘Thus Far the Lord has helped us and where do we go from here?’” Sandi Rasberry said.

The celebration will end church members and attendees placing small painted stones near the large permanent stone in front of the newest addition to the building.

“The stone serves as a visible reminder of how God has worked in the lives of many people throughout these 200 years,” Rasberry said. “Many lives have been changed for a better life here on earth and eternal life for the future.  Along with the history that is being written in a book that reveals how Ebenezer came into being by the power of God, the stone serves as a reminder to future generations that God is the solid rock we should build our lives on through a relationship with Jesus Christ.”

Thorsby police chief Rodney Barnett has advised residents to be aware of a pair of vehicle break-ins that have taken... read more