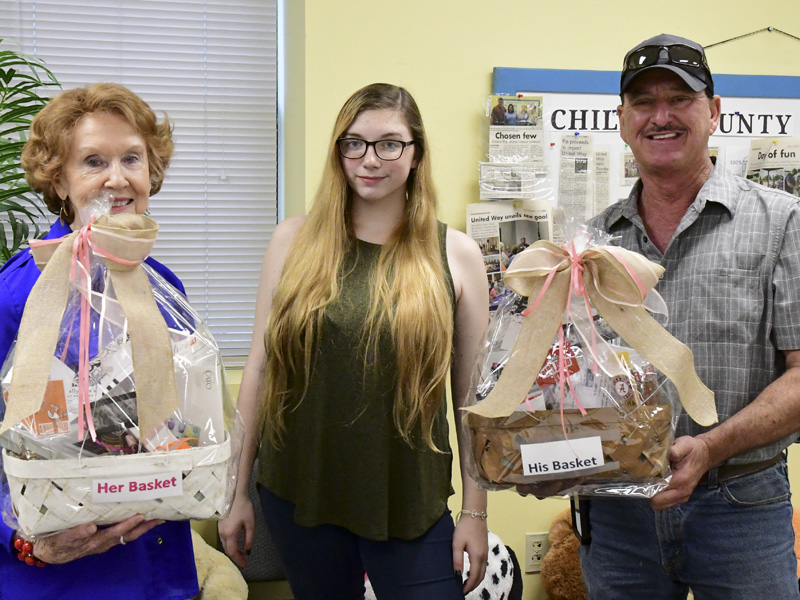 A variety of items were donated from local businesses for the Chilton County United Way's “his” and “her” Peach Jam baskets. (Photo by Anthony Richards)

The Chilton County United Way drew a pair of winners on July 3 for the donation baskets they promoted during Peach Jam on June 29.

Steve Roberson was drawn as the winner of the “his” basket, while Amanda Jackson won the “her” basket.

Both baskets held a variety of items donated by local businesses.

The “his” basket included items such as a men’s watch from Edwards Jewelers, a free oil change from Southern Dixie Auto Repair and a $25 gift card from Russell Do It Center in Clanton.

Some of the gifts in the “her” basket were a Pandora bracelet from Classy Touch Boutique, a $20 gift card to Hollywood Nails and a dog tie from Little Angels Pet Salon.

Reign Aldridge volunteered with the United Way at Peach Jam and was given the honor of randomly picking out the names from a basket. 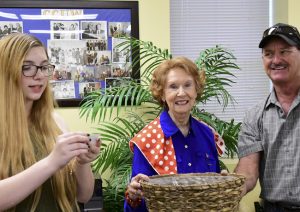 CCUW volunteer Reign Aldridge reads the name of the “his” basket winner during a drawing on July 3. (Photo by Anthony Richards)

“I absolutely loved seeing the faces on all the people as we would tell them about the baskets,” Aldridge said.

Peach Jam was her first time volunteering with the nonprofit organization

According to Aldridge, her mother’s desire to always work with the United Way allowed her to see the importance of helping out the cause.

“Helping support United Way is all about helping to support others,” Aldridge said.

The United Way had a booth set up at Peach Jam where people could stop by and get more information about the group while also having the opportunity to sign up for the drawing and pickup a fan to help stay cool in the hot temperatures.

“I thought giving away the fans was very thoughtful,” Aldridge said. “The experience is something that I’ll never be able to forget, because I’ve always love giving back to people.”

She plans to come back and help out the Chilton County United Way even more in the future.