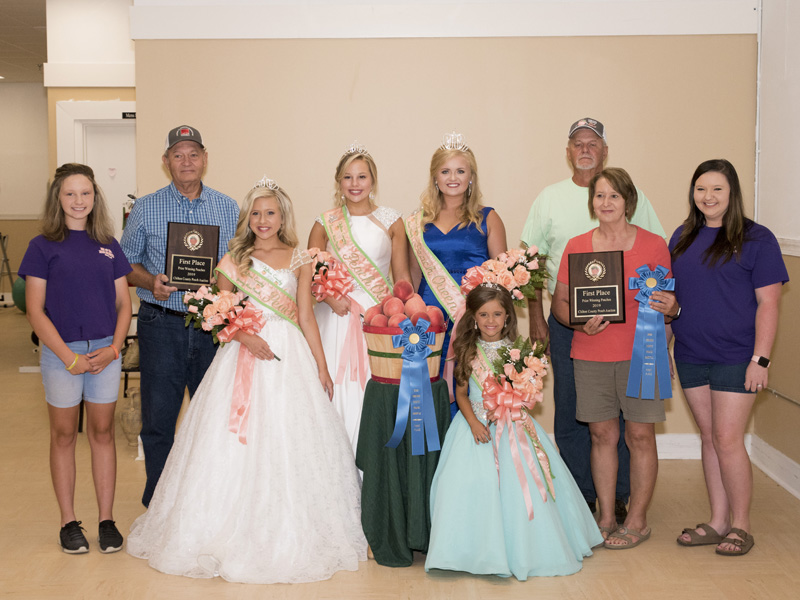 M&M Farms won the 2019 Peach Auction with a White County variety. The top basket was purchased by the Chilton County Farmers Federation for $4,200. (Photo by Keith McCoy)

The 2019 Peach Auction was only the second time that a white peach had won the event.

However, the White County variety took it even a step further by claiming the top two spots at this year’s event.

M&M Farms with Mark and Melissa Knight grew the “best peach” basket, while his brother Seth Knight with Knight Farms made it a family affair with a second-place finish.

“We always keep an eye on two or three varieties, but the variety I thought would do good didn’t even place,” Mark Knight said. “You just never know.”

A white peach variety has won two of the last three years following Jerry Harrison’s victory in 2017 with a Carolina Belle.

According to Mark Knight, the crop of peaches that produced the winner actually came in two weeks early.

“They usually don’t fall in this [time] slot,” Mark Knight said. “Other peaches were bigger, but they were just so pretty and laid in the basket so good.”

There are differences in texture and flavor with a white peach compared to a more typical variety.

However, Mark Knight said that one of the downsides of white peaches is that they get ripe very quickly.

“For years people have been trying to develop a good firm white peach that will at least last to be hauled 50 to 60 miles,” Mark Knight said. “They’ve got several now that can do that.”

Nineteen baskets were sold during the auction from nine different farmers across the county.

The Chilton County Farmer’s Federation purchased the top basket from M&M Farms for $4,200, while Clanton Tractor purchased the runner-up for $2,700.

“It helps promote the industry and goes to a real good cause,” Chilton County Farmers Federation President Wendell Kelley said. “We are farmers and we represent all of the farmers. We try to help out anyway we can.”

The top five peach baskets each sold for more than $1,000.

Several dignitaries from throughout the area and the state were on hand for the auction and the Peach Festival weekend.

“Farming is the biggest industry in this state, and we’re peach fans,” Tuberville said. “Obiviously everybody doesn’t grow peaches, but to see the support the community has for its farmers makes you feel good.”

The final basket of the auction was purchased in memory of former Rep. Jimmy Martin.

Final results from the 2019 Peach Auction. Included is the grower, the purchase price and the buyer for all 19 baskets of peaches.

Joshua Jones: $700 by The Clanton Advertiser