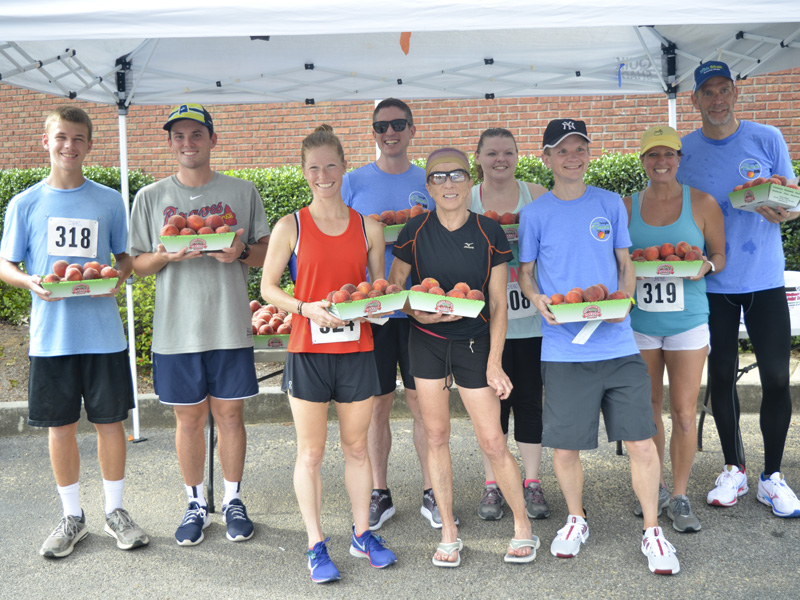 The top age group finishers after the 10K portion of the 16th Annual Peach Run on June 22. (Photo by Anthony Richards)

The Peach Week festivities began with the 16th Annual Peach Run hosted by Cornerstone Fitness & Wellness in Clanton on June 22.

“We like to help kick it off and get things going,” Cornerstone co-owner Amanda Giles said. “We would like to continue that tradition and are thankful to be a part of it.”

The route went through surrounding neighborhoods and streets in the heart of Clanton and began and ended at Cornerstone.

Fifty-eight runners participated in the 5K, while 22 took on the challenge and completed the 10K portion of the event.

The youngest competitor was 8 years old, and the oldest was 71.

“I had a pace in mind that I wanted to run,” Natalini said. “Summer running in the south is really really difficult. The goal was to just hold to that pace and just have a good time with it, and I think we accomplished that.”

Jeremy Moujoodi of Hoover was the highest finisher at the 5K distance after completing the run in 18:08. 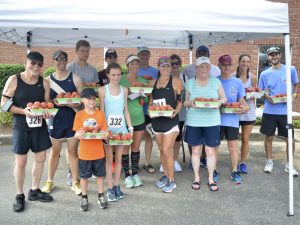 The top 5K finishers in the various age groups. (Photo by Anthony Richards)

Ashton Leckrone of Montgomery was the first female to cross the line in the 5K with a time of 22:54.

“It was a blast,” Ryan Stanford said. “The weather was great and the course was awesome. It was a little hilly on backend of the 10K part, but it was really memorable.”

Stanford came as part of a group of Montgomery runners. Although it was his first time, he promised he will be back to enter in next year’s Peach Run.

According to Stanford, he appreciated how well marked the course layout was. This is a big deal especially for someone not familiar with running the streets in the area.

He found out about the run through promotion of the event on Facebook.

Of the 80 runners that took part, two were from Brooklyn, New York, while the rest were from either Alabama or Florida.

“This year was up [in participants] from last year, so we were excited about that,” Giles said. “We had a lot of different people from different places. We get a lot of interest from people outside of Chilton County that just like to run.”

Natalini was one of those that came from outside the county to attend.

“We had just moved to Montgomery about a week and a half ago and we were just looking for a local race,” Natalini said. “Some of the people that we know who run in the area mentioned it, so we drove up here. We love the local running community.”

Door prizes were donated by local businesses and handed out after the race, while boxes of peaches were given to the top finishers.

Another exciting sidebar from Natalini’s good result is that she now has had the opportunity to try a Chilton County peach.

“This will be my first time,” Natalini said. “I’m going to go home and bake today, so I’m excited.”