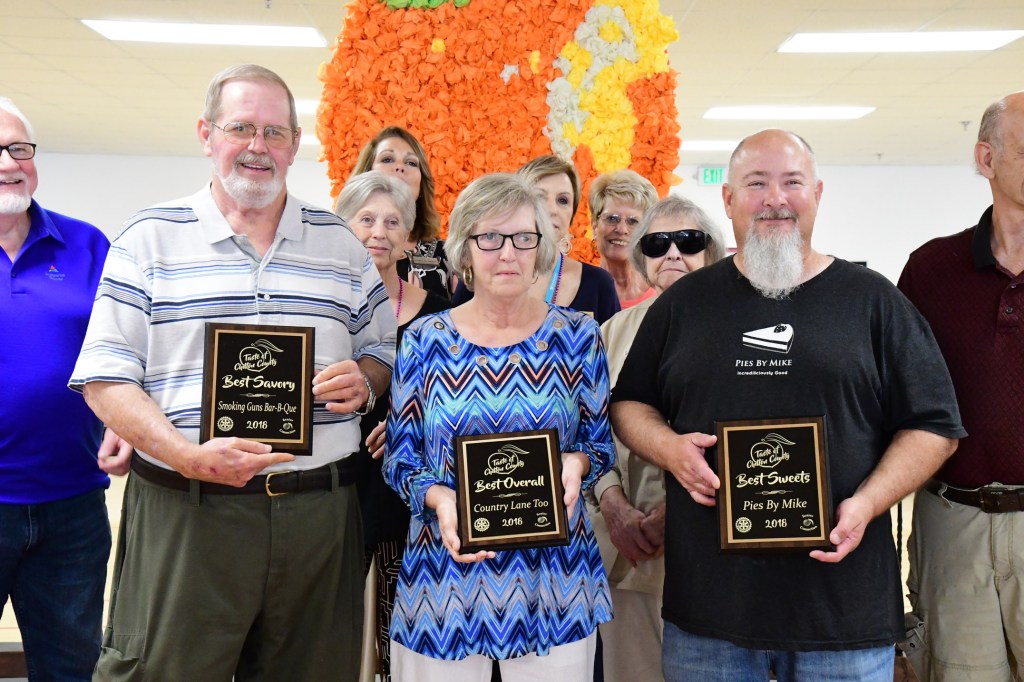 The three categories were Best Savory, Best Sweets and Best Overall, which were won by Tom Carter of Smoking Guns Bar-B-Que, Mike Graham of Pies by Mike and Barbara Minor of Country Lane Too respectively.

The Taste of Chilton County has become an annual event and will be in its third year on Oct. 14.

Rotary Club and Senior Connection partner to put on the event, which features food from many local vendors and restaurants. Attendees vote for their favorite selection in each category, and the person or group with the most votes wins.

Gordon Swenson, president of the local chapter of Rotary Club, presented each category winner with a plaque during the ceremony.

Carter started Smoking Guns in Clanton about two and a half years ago.

“It’s something I’ve wanted to do all my life,” he said. “After traveling 220 nights a year I was tired of traveling, and I decided if I was going to do it, I’d better do it now. Previously I was in law enforcement, and I spent 24 years in the body armor business. I covered the Middle East, Europe, Canada and the United States.”

Smoking Guns offers many different items, including smoked turkey, brisket, baked beans (made with two kinds of beans and three kinds of meat in Carter’s own recipe) cooked on the smoker, Danish ribs, which are like baby back ribs but much meatier according to Carter, and pork.

“This fall we’re going to do shrimp and sausage skewers,” he said.

The restaurant also does sandwiches.

“With it being our first year open it felt great (to win the category),” Carter said. “We picked up a lot of business from it. We had a lot of people come up because they came to the Taste of Chilton County.”

Graham began selling his wares out of his home in November of 2014.

“It grew and grew,” he said. “In April of last year, I jumped to full time with it. I have the little shop. I am trying to get into more and more restaurants and specialty stores.”

As the name implies, Pies by Mike sells mostly pies, both whole and by the slice.

“We open for retail on Wednesdays from 6:30 to 11:30 a.m.,” Graham said. “I have what I call Southern breakfast pies with ham, egg and cheese or sausage, egg and cheese. Our best selling pie from the beginning has been pecan, with the second being Toll House. I am doing 12-13 now, like key lime, lemon mousse, praline mousse, strawberry cream, fudge, pumpkin and apple.”

Graham said he was “humbled and honored” to be selected as the Best Sweets winner.

“It was great, especially when there was some great competition,” he said. “We did see an uptick in business. Being a part of the Taste of Chilton County benefited us most definitely.”

Minor began her catering business, County Lane Too, about 15 years ago.

“It’s a full catering line,” she said. “We do weddings, lunches, conventions and all types of events.”

She said it feels “really good” to have been selected as the Best Overall winner from last year’s event.

“It makes you feel good because you know a lot of people in your hometown feel that way about you,” she said. “I think we got some really good advertising from it.”