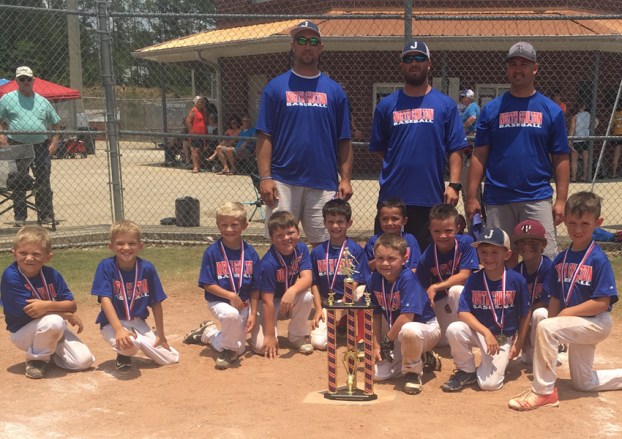 The North Chilton 6U All-stars baseball team consists of 11 players, many of which were playing in their first tournament setting. (Contributed photo)

Anytime a team steps out on the field together for the first time there is a certain degree of uncertainty.

That was case for the North Chilton 6U All-stars baseball team, who quickly answered any uncertainty there might have been by winning the Shelby County Dizzy Dean Invitational on June 2.

Being just 6 years old and under it was the first time that many of the players experienced playing in a tournament atmosphere.

However, they handled it with flying colors and defeated Chelsea 25-17 in comeback fashion to take home the championship honors.

The title game was the second time North Chilton faced Chelsea in as many days, losing 20-18 a day earlier.

North Chilton was able to learn from the loss and flipped the script when it mattered most with a title on the line.

North Chilton averaged 22.5 runs per game and won three of the four contests the team competed in.

Other wins included 22-5 over Calera and 25-6 against Shelby County to secure a spot in the championship.

The team consists of players from Jemison, Thorsby and Maplesville.

The Thorsby Council accepted the resignation of Fire Chief James Conner and shortly after approved the promotion of Josh Parker... read more