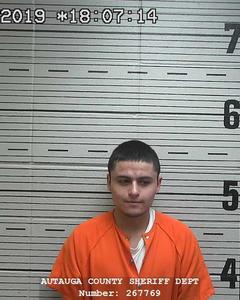 An illegal immigrant facing a murder charge for his role in the death of a North Chilton woman was almost deported after being released from the Autauga Metro Jail on bond earlier this month.

According to Chief Assistant District Attorney C.J. Robinson with the 19th Judicial Circuit, 20-year-old Jorge Ruiz was picked up by Immigration and Customs Enforcement agents on May 2 after posting bond.

Ruiz was indicted by a grand jury in Autauga County in March on charges of reckless murder, possession of alcohol and driving without obtaining a license charges.

The murder charge is a Class A felony that carries a sentence of 10 to 99 years, or life, in prison if convicted.

According to Robinson, Ruiz allegedly attended a party in Birmingham in October of last year. He was returning to Prattville early in the morning on Highway 31 when he struck 29-year-old Marlena Hayes, a nurse at Prattville Baptist Hospital, who was heading home after her shift.

Ruiz was traveling at a high rate of speed when his vehicle swerved onto the wrong side of the road and hit Hayes’s vehicle, killing her. The wreck occurred just a few miles north of Prattville.

Initially, Ruiz was jailed with no bond. However, once he was indicted a circuit judge changed the no bond to a $50,000 bond. This allowed Ruiz to post a percentage and be released from the Autauga Metro Jail.

“Nobody did anything wrong procedurally,” Robinson said. “We almost had a murder case slip through our hands because of a bond.”

Once Ruiz was released on bond, an ICE hold prompted members of the agency to pick him up for deportation.

According to Robinson, ICE agents took Ruiz to Montgomery before he was to be taken to Louisiana to “take a boat to Mexico.”

Robinson said once Ruiz was back in Mexico, he would have been free to change his identity and attempt to re-enter the United States illegally. He would have escaped from the murder case entirely.

Once Robinson’s office learned of the situation, “we had every agency on the phone, including the Chilton County Sheriff’s Office. We had attorneys ready to go in two courtrooms.”

Robinson’s office was forced to interrupt Circuit Judge Bill Lewis, who was presiding over a different case.

Lewis then signed an order to revoke Ruiz’s bond and have him returned to the Autauga Metro Jail.

“Thank God for Judge Lewis,” Robinson said. “(Once that was done,) ICE stopped, turned around and came back to Prattville. He woke up in the Autauga Metro Jail, and he was back there that night.”

Ruiz’s case is now assigned to Lewis, with a preliminary hearing that was set for May 22.

Robinson said steps have been taken to make sure that something like the bond issue does not reoccur in the case.